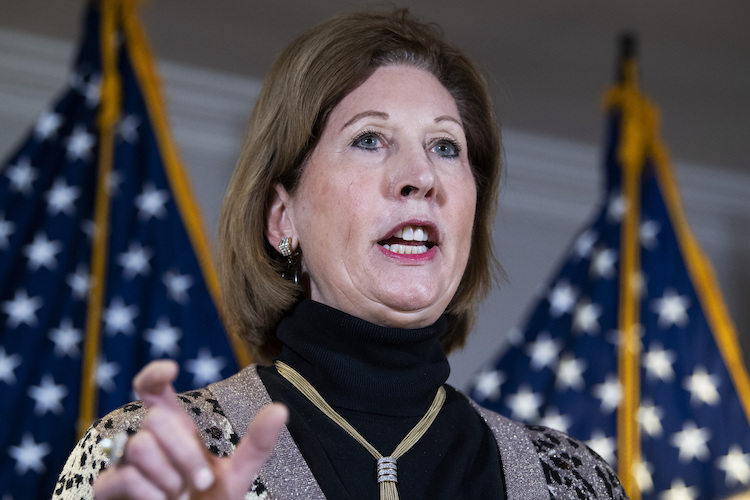 Lawyer Sidney Powell at a news conference at the Republican National Committee on lawsuits regarding the outcome of the 2020 presidential election on Nov. 19, 2020. Photos by Tom Williams/CQ Roll Call via AP Images and by Frederic J. Brown/AFP via Getty Images.

Troubles continue to mount for lawyers involved in challenges to the 2020 presidential election results.

Mitchell resigned from Foley & Lardner after news surfaced of her involvement in a phone call in which then-President Donald Trump repeatedly asked Georgia’s secretary of state to “find” the votes needed for him to win in the state.

The 65 Project was formed to hold lawyers accountable for frivolous election claims, according to Law.com and Axios. The name of the group is based on a tally of the lawsuits filed to contest 2020 election results.

Axios described the 65 Project as “a dark-money group with ties to Democratic Party heavyweights,” while the group described itself as bipartisan. One advisory board member is Paul Rosenzweig, a conservative who was former senior counsel for the Whitewater investigation of then-President Bill Clinton, according to Axios. Another is former ABA President Roberta Cooper Ramo.

The 65 Project plans to ultimately target 111 attorneys, Axios reports. It also hopes to prod the ABA to adopt language in model ethics rules stating that “fraudulent and malicious lawsuits to overturn legitimate election results violate the ethical duties lawyers must abide by.”

The ethics complaint against Sidney Powell was filed by the State Bar of Texas’ Commission for Lawyer Discipline on March 1, but it wasn’t made public until seven days later, according to Courthouse News Service.

Powell took positions that unreasonably increased costs and other burdens of the cases, including failing to dismiss one suit after her requested relief was moot, the complaint said.

She also is accused of falsely telling a court that a certificate from Georgia’s secretary of state was undated. In reality, the certificate was altered to remove the date, according to the complaint.

In a separate matter, the 6th U.S. Circuit Court of Appeals at Cincinnati last month refused to stay a sanction against Powell and five other lawyers that required them to take continuing legal education courses for filing a frivolous election-fraud lawsuit.

On a positive note for Powell, a New York state judge on Tuesday tossed defamation claims against her by voting machine company Smartmatic, report Reuters and the Washington Post. Judge David B. Cohen of the New York Supreme Court’s 1st Judicial District said he had no jurisdiction over the claims against Powell, who is a Texas resident.

But Cohen permitted allegations against Fox News and allowed some claims against Trump lawyer Rudy Giuliani. Cohen said the news network “turned a blind eye to a litany of outrageous claims about [Smartmatic], unprecedented in the history of American elections, so inherently improbable that it evinced a reckless disregard for the truth.”

Powell’s lawyer, Howard Kleinhendler, told Reuters that his client was “confident that any subsequent litigation by Smartmatic or others will reach the same result.”

ABAJournal.com: “Meet Sidney Powell, the conspiracy-minded lawyer who vowed to ‘release the kraken’ in election suits”

Attorney Burnout Is At An All-Time High

After Record Profits, Biglaw Partners Wonder If They Need To Keep Working