What with COVID, the economy and the day-to-challenges of practicing law and managing a firm, it’s been a tough three years. Yet despite it all, smaller law firms have a bullish outlook on their future prospects — and with good reason.

Nearly six in 10 lawyers in small firms — which the survey defines as those of 29 lawyers or fewer — say they expect growth over the next 12 months in revenues per lawyer, billable hours, and profits per lawyer. Across every metric — billing rates, productivity, realization rates — greater numbers of lawyers expect to see moderate or high growth over the next year.

The same holds true for the next three years, as small firm lawyers also expect high-to-moderate growth to continue in revenues, profits, demand for services, and other metrics. 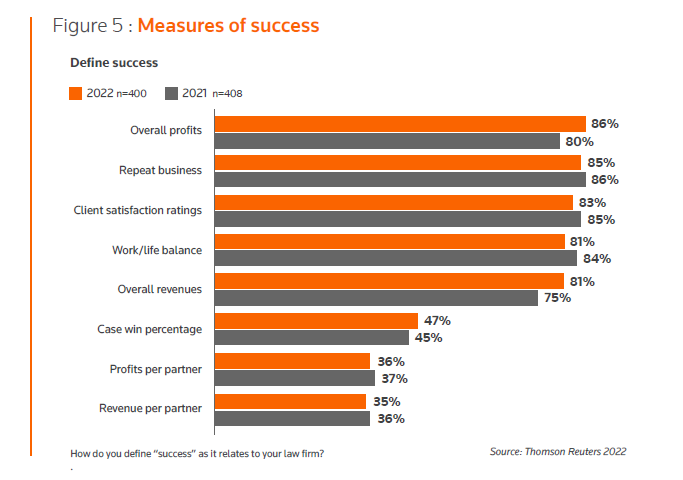 But the survey finds that there are variations in how firms view their success based on their size. For solos and firms of 2-6 lawyers, their evaluation of their success dipped last year but rebounded in 2022. For firms of 7-10 lawyers, the percentage of lawyers describing their firm as very successful has steadily risen over the last three years, from 29% to 35%. But for firms with between 11 and 29 attorneys, that percentage dropped from 39% to 23%.

Of course, a firm’s evaluation of its success turns on how it measures success. In the 2021 survey, repeat business was the most commonly cited definition of success, followed closely by client satisfaction ratings and work/life balance. This year, the most frequently mentioned measure of success was overall profits, followed by repeat business, client satisfaction, and work/life balance. 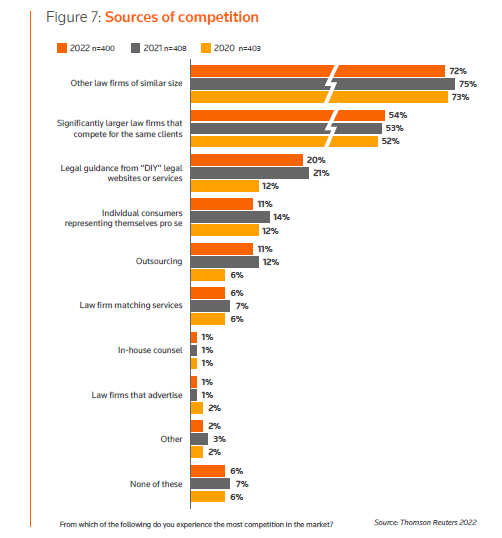 As in past years, the survey finds that small firms face competition both from above and below, in that they see their competition not only as similarly sized firms, but also as larger firms and self-help legal websites.

“The growing popularity of DIY legal websites continues to encroach upon small firms’ clientele,” the survey found. “The percentage of small firm lawyers who view such websites as major competitors took a significant jump in 2021 and has remained elevated in 2022. Such competition — readily accessible via computers and smartphones and viewed by consumers as a less expensive alternative to law firms — is putting the onus on small law firms to improve efficiency and client service.”

Even though firms are optimistic about their futures, they also recognize that they face challenges. The survey finds that the top challenge small firms face is that of spending too much time on administrative tasks and not enough time practicing law. The average law firm attorney spends just 56% of their time practicing law, down from 58% in 2020.

Other top challenges they most frequently identified:

With regard to the challenge of rising costs, the most common method by which firms respond is by increasing their billing rates, followed by adopting new technology, according to the survey. Other responses include: 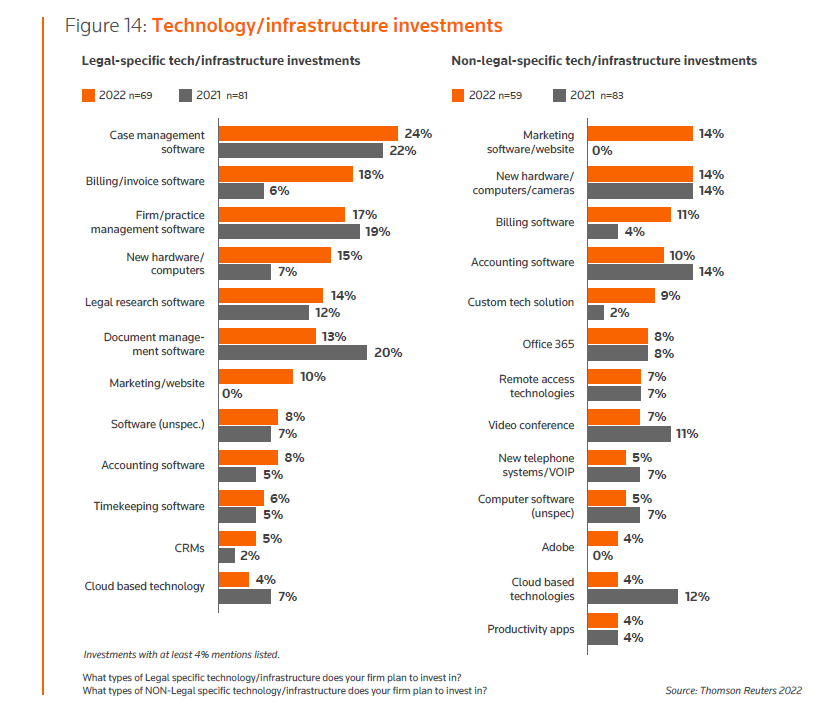 On the technology front, the survey finds that small firms are either increasing their tech spend or holding the line. Among slightly larger firms, those of 11-29 lawyers, the percentage that increased their investment in tech nearly doubled in 2022 to 38%, from 20% last year. At the same time, the number of firms planning to decrease their tech spend fell from 8% in 2021 to 5% this year.

Some of it is also going to non-legal specific tech, such as websites, hardware, and billing or accounting software.

It is interesting that the survey appears not to have asked about electronic payments technology — a technology whose use appears to have soared in recent years, according to other surveys.

But the survey does find that getting paid by clients is less of a concern to small firms this year. Whereas in 2020, 64% of firms viewed getting paid as a significant to moderate challenge, this year, that number has dropped to 54%. “And the portion of firms with the greatest urgency around this issue, those who rated it as a significant challenge, has been cut by more than half to just 9% from 19% in 2020,” the survey says.

“[T]here is emerging evidence that suggests small law firms are demonstrating their ability to rise to the challenge and address some of their most pressing needs,” the report concludes. “Continuing to strategically focus on their goals and the challenges that could stand in their way will enable them to fully capitalize on the growth opportunities that they are foreseeing.”

Past years of the survey:

MyCase And LawPay — Better Together

Purchasing AI For eDiscovery: New, Now, And Next