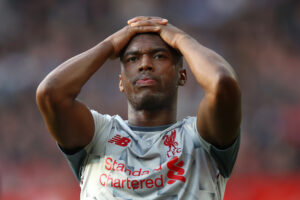 Daniel Sturridge upon learning that contract law is a harsh mistress. (Photo by Clive Brunskill/Getty Images)

Pop quiz, hotshot: a celebrity makes an offer to the public, someone accepts the contract by performance. Has a contract been created?

That’s not just a hypothetical, but a real fact scenario. In 2019, soccer star Daniel Sturridge’s dog was stolen following a break-in. He posted a video offering to “pay whatever” — “20Gs, 30Gs, whatever” — for the return of his Pomeranian.

Check out the video below.

And Los Angeles man, Foster Washington, found the dog, Lucci, and returned him. But a payday was not forthcoming for Washington. As reported by the New York Times:

To be clear, the Los Angeles Police Department confirmed Washington was not implicated in the break-in in any way. But still, Sturridge didn’t pay. So Washington filed a lawsuit for breach of contract. And Judge Curtis A. Kin of the Los Angeles County Superior Court agreed, and Washington will be getting $30,000 in damages.

But Sturridge’s story of what happened was different — at least on Twitter:

Just to let you know the truth on xmas!
I met a young boy who found my dog and paid him a reward which he was delighted with as was I to get my dog back because he was stolen. I took photos with him and we have videos and audio of everything that happened when Lucci was returned.

Don’t worry, law school Twitter is on top of the case. And yes, this will be on the exam.

But see Kolodziej v. Mason – 996 F. Supp. 2d 1237 (distinguishing a promise as unreasonable when made on TV seeking performance for a reward)

Do federal jurors still care whether a witness is caught in a lie? Not as much, say 2 veteran litigators

Two Firms Opened Up The Bonus Coffers Right Before The Holiday

Two Firms Opened Up The Bonus Coffers Right Before The Holiday

Law Student Documents Her Struggles With Long COVID During School

An ‘Unprecedented’ Project: How ATL Delivered Extraordinary Results In A Client Partnership