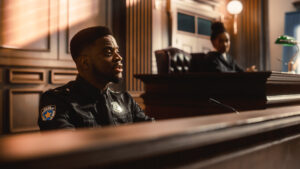 For many law students, doing journal is just the socially acceptable form of hazing you have to endure if you want your application to stand out in that Biglaw or clerkship application pile. You share a co-op space with your sleep deprived peers, seriously consider the efficacy of injecting caffeine, and strap in for the grunt work of editing and finding citations for the bombardment of papers teachers from other schools send to you.

Some people get a hell lot more out of the experience — take Stanford Law student James Stone for example:

He had been reading about communities nationwide moving toward making police misconduct records more accessible to the public. With his mind on the rules of evidence, including the nuanced situations where certain prior bad acts of defendants are admissible in criminal trials, he started thinking about the admissibility standards around past instances of misconduct by police officers who are sued in civil cases for excessive force.

“I wondered if the past-act admissibility standards in these trials are the same for the accused police officers as they are for the plaintiffs bringing those cases,” said Stone.

Prior to the statistical analysis, many people’s answer would have been no — see:

Also prosecutors: We will always introduce defendants’ past criminal convictions as evidence at trial to attack their credibility

The amazing thing is that among the evidence the police are bringing against the whistleblower, is that he committed misconduct in the past by NOT blowing the whistle in a previous incident.

Why does killer Derek Chauvin’s idiot lawyer get to use George Floyd’s past as an excuse for him being murdered but no one brings up the 18 incidents and complaints of police misconduct on Chauvin’s abysmal record?

That said, we are a data driven culture. And while mere words from an officer with a documented history of lying may be enough to condemn any guy or gal off the street, you’ve really gotta prove your case when you speak out against the men in blue. James did just that.

A year of research and 17,000 words later, he has the answer to his question: no. The standards are not the same…Stone critiques how courts’ interpretations of the long-held “objective reasonableness” standard, paired with Rule 404(b) of the Federal Rules of Evidence, cause judges to hold certain officer misconduct evidence irrelevant and therefore inadmissible at trial. Conversely, as he analyzes, many judges admit evidence of a plaintiff-victim’s past drug use, criminal activity, encounters with police, and gang affiliation under what he argues are strained relevance arguments. He undertakes the same analysis to rules around use of past acts to impeach the testimony of plaintiffs and accused officers.

Call me crazy, but I think this data shows that what we are calling police brutality isn’t merely just a policing issue. Are the police involved? Of course, they’re the ones swinging the batons or jumping handcuffed people and the like — but they aren’t doing so unsupported. Judges also play a role in determining what information is allowed to be admitted as evidence. As important as it is for judges to avoid even the appearance of impartiality — that is of course why Michigan Supreme Court Justice Richard Bernstein took the initiative to tell Justice Bolden how to do her job and not hire Pete Martel as a clerk, he voiced the concern that it may send a hostile message to police facing trial. I wonder how often judge impartiality, via differing evidentiary standards, cuts across the attempts at impartiality and is just straight up pro-cop? I have no reason to accuse Justice Bernstein of doing this — it would be baseless and is not my intention. That said, to anyone thinking about further developing James statistical analysis, Michigan is as good a state as any other to start. The invitation extends outside of law professors trying to hit tenure as well! Part of what makes this story so interesting is that Stone’s research was chosen by a journal without his being a professor!

“I very quickly realized that most of the journals won’t even look at submissions from law students, but some were somewhat ambiguous in their parameters. For example, Washington University School of Law said it would consider publishing pieces around 15,000 words—so-called “commentaries”—from ‘members of the legal academy, bench and bar,’” Stone said. “So I said to myself, ‘hey, maybe I’m in ‘the academy?’ After they extended an offer to publish the article, I spent a few weeks wondering if they even realized I was a student.

My hope is that my minting school, trailblazers that they are, saw the significance of Stone’s research and published it even though they knew he was a student. That said, I’ve seen the long hours WashU students spend in those journal rooms. Late night burning the midnight oil, James Stone does sound defacto professorial. Either way, shouts out to Stanford and WashU!

ChatGPT: What It Is And Why It Matters To Lawyers

ChatGPT: What It Is And Why It Matters To Lawyers

What Do You Need To Know When It Comes To NFTs And The Law?