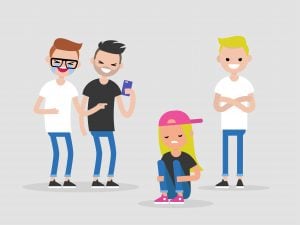 Periodically, Above the Law will get wind of some sexist ranking law students have put together, giving female classmates a score based on their own f*cked-up perceptions of what’s attractive — like it’s 1984 and they’ve just found out what a slam book is.

The truth is it’s a juvenile, bullsh*t move. There’s no amount of “boys will be boys”ing that changes this fundamental fact. And you’d really think that by the time you get to law school, with the student body being grown-ups (allegedly), these kind of shenanigans would be over. Unfortunately, that’s not true.

The latest law school to have its students participate in sexist rankings is the University of Texas School of Law — ranked 17th on the latest U.S. News & World Report list. As reported by a tipster:

Last fall, male 1L students at UT law created a list of female law students and rated them based on attractiveness, explicitly deducting points if the female student was too ambitious or too smart. Albeit par for the course in Texas, this is a disappointing development. UT administration was ineffective in addressing the issue, and all participants received was a warning.

These students probably thought they were having a laugh at the expense of classmates they thought were less important than themselves. But openly objectifying their classmates — future colleagues —  leaves a black eye on the whole school. Of course, they never thought about (or did, but just didn’t care) the way their actions impacted anyone but themselves.

There’s now a website that’s being run by folks outraged that law students are “being subjected to sexual harassment by ignorant misogynists.” They’re collecting statements of solidarity that demonstrate the outrage felt by members of the greater UT Law community:

1Ls of UT Law: I am sorry you have to deal with this embarrassing and misogynistic behavior from your classmates. Being a woman in law is hard enough. We have to work harder and smarter just to be taken as seriously as these clowns. I support you and stand with you. <3

Partner of a UT law student — it’s pretty cringey and pathetic that this shit is going on at a nationally ranked law school. And scary to think that these boys might be future leaders in our judicial system. What an embarrassment.

It’s telling that where one could see a potential colleague, friend, mentor, or simply an equal, that group of men chose to see an object. It does real harm to place women outside the realm of your peers. It robs and has historically robbed them of being seen for their true potential. Women are passed up on for opportunities for being ranked too high, too low, even too unremarkable, which are factors unrelated entirely to their worth in the workplace and as friends. Perpetuating that system of assigning worth based on attractiveness is irresponsible, thoughtless, and morally wrong. To the women on that list, I hope you are constantly reminded of your own worth. I hope I can add to that too

As ugly as the actions of the law students ranking their classmates is, perusing these statements of solidarity will reassure you of the good in the world.

Above the Law reached out to the University of Texas Law for comment, and did not immediately hear back.

Kathryn Rubino is a Senior Editor at Above the Law, host of The Jabot podcast, and co-host of Thinking Like A Lawyer. AtL tipsters are the best, so please connect with her. Feel free to email her with any tips, questions, or comments and follow her on Twitter @Kathryn1 or Mastodon @Kathryn1@mastodon.social.

Why are Hours of Service so Important for Truck Drivers in New York?