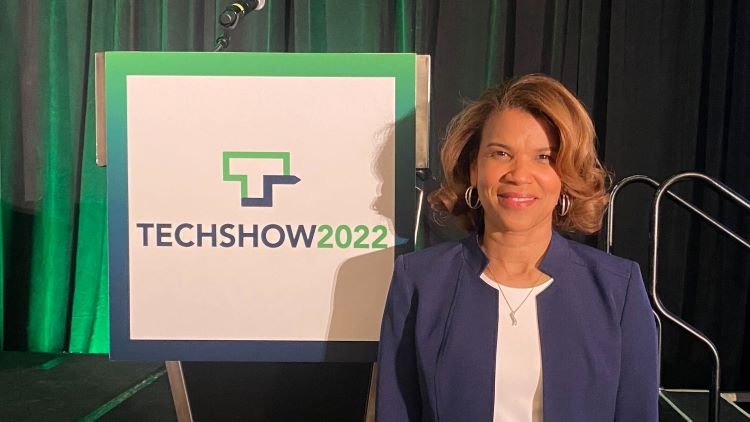 Kemba Smith Pradia at the ABA Techshow 2022 on Friday. Photo by Victor Li.

Kemba Smith Pradia was sentenced to 24.5 years in federal prison nearly three decades ago for conspiracy to participate in her boyfriend’s drug activities.

However, a cover story in Emerge magazine helped her become a poster child for sentencing reform for first-time, nonviolent drug offenders and led to her securing the legal assistance that ultimately resulted in then-President Bill Clinton commuting her sentence in 2000 after she spent 6.5 years in prison.

During her keynote address at the ABA Techshow 2022 on Friday afternoon at the Hyatt Regency Chicago, Smith Pradia urged those in attendance to find a way to assist the hundreds of thousands of people still in the U.S. prison system or those who are formerly incarcerated such as her.

The criminal justice reform advocate especially urged tech companies to do their part and become allies in the movement for reform like others in the industry have to date.

“They’re tech companies that are seeing the need to create employment opportunities for people inside and providing training for them while inside, so they will not just have a job when they’re released, but they’ll have a career,” Smith Pradia said.

She also said the formerly incarcerated could help tech companies design products that will solve pressing criminal justice issues, so she urged those in the audience not to “write us off.”

Follow along with the ABA Journal’s coverage of the ABA Techshow 2022 here.

She cited R3 Score Technologies as an example of an organization doing great work to help formerly incarcerated people. Founded by Teresa Hodge, the company seeks to modernize criminal background checks and credit scores by providing context for an applicant’s history and balancing the risk to an employer or a business. Some factors included in R3 Score Technologies’ criminal background check are severity of the crime, how long ago the offense took place and certifications attained while in prison.

Smith Pradia also mentioned Marcus Bullock’s Flikshop, which allows family and friends to send pictures as postcards to prisoners across the country.

“All these innovative ideas are great, and I wish that some of them were in existence when I was directly involved in the system,” she said.

Additionally, Smith Pradia praised the leaders of Netflix and Salesforce for financially supporting a proposition in California several years ago that would have repealed the death penalty in the state, though the measure was ultimately defeated, according to the Detroit News.

Smith Pradia, who is the author of Poster Child: The Kemba Smith Story, also said tech companies “have genuine power to hold governments leaders and changemakers accountable” and noted the great need for tech advancements in the criminal justice space.

“Few aspects of life in the 21st century remain untouched by technology,” she said. “Among the slowest to adapt, adopt or innovate technology is the criminal justice system.”