The Difference Between Keeping Lawyers And Losing Lawyers? It’s More Than Money. 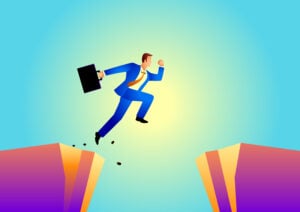 Back in January, the Thomson Reuters Institute and Georgetown Law’s Center on Ethics and the Legal Profession released a comprehensive report on the state of the legal profession that included a particularly curious chart. Tucked away toward the back of the report, the authors included a chart that broke down the differences between “Stay firms” and “Go firms” — dividing the legal landscape into two categories based on turnover and then charting the real distinctions between the lateral market haves and have nots.

Not that the lateral market is the be all end all. A firm can be quite successful with a higher turnover model. Though as one partner once told me, lawyers are replaceable but they’re not fungible, and retention matters at some level.

This morning, a follow-up report (you can get it here) blows out that one chart and provides a ton of data on the differences between Stay and Go firms.

But how does the report define Stay firms and Go firms? At the most simplistic level, it took turnover across multiple years, did some weighting to account for some obvious variables, and produced two general categories. And they look like this:

Go firms are generally bigger, which makes sense as the Biglaw business model relies on folks leaving as they work up the seniority ladder. Stay firms are generally smaller, which makes sense because that business model relies on getting lawyers already trained and tested by the pressure cooker of Biglaw. That said, the methodology controls for the leverage differences and still came out this way.

How different are the two categories? 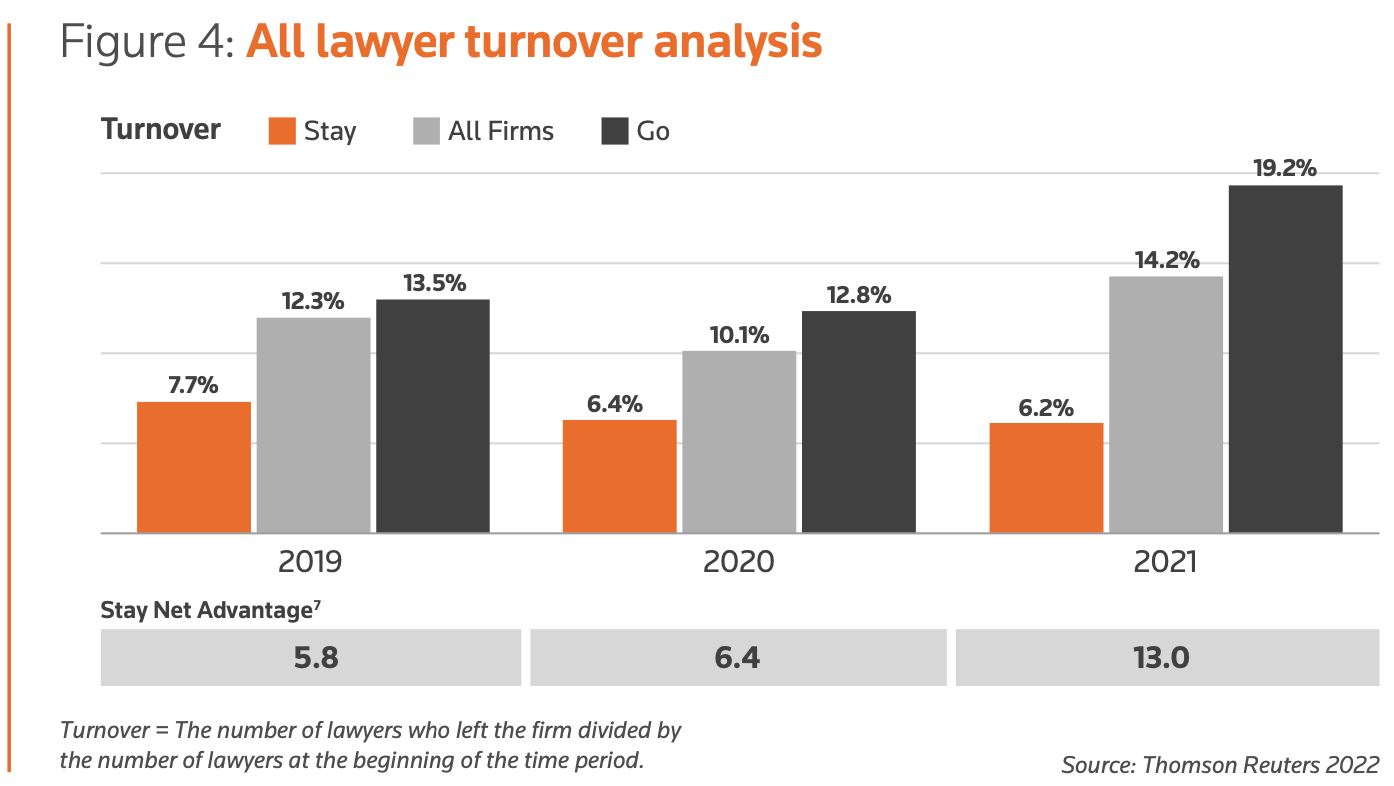 That’s an extraordinary gap and it’s only getting bigger. Check this one out! 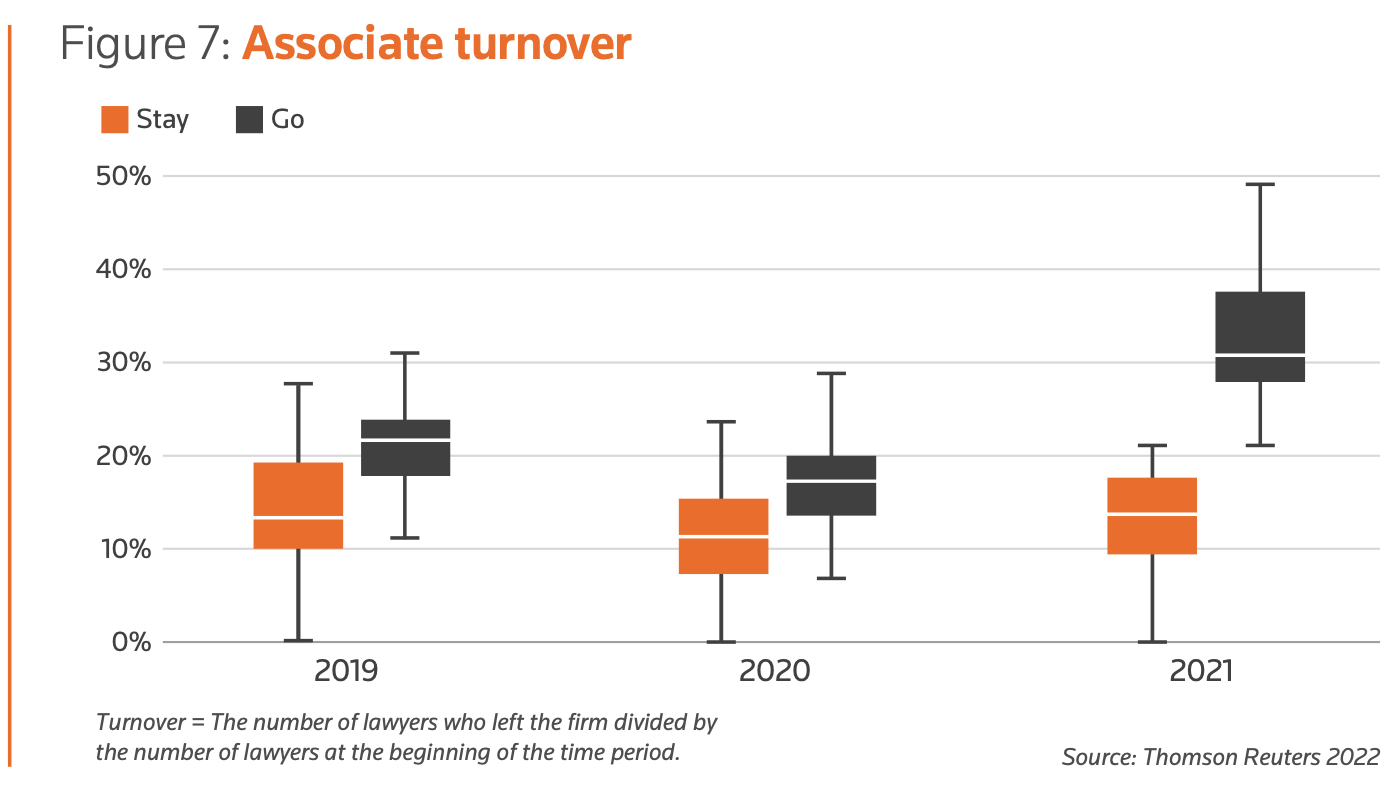 Obviously the lateral market is hot right now, but the proper takeaway is that the firms generally considered “low turnover” are holding steady while the firms already considered “high turnover” are feeling all the heat. So you can’t chalk it all up to industry wide demand — there’s something going on that gives certain firms a transitory feel.

“It really comes down to the culture,” said Bill Josten with the Thomson Reuters Institute said. “I think the biggest takeaway is that there’s a whole lot more than just money in keeping people.”

That brings us to the curious finding in the original January report that attorneys at these Stay firms work more while getting paid less. At first blush a counterintuitive result, but with the benefit of this report it’s a lot easier to understand.

“The takeaway is that if you have happier people they’ll want to work harder,” Josten said. “We went out and did a separate interview to ask associates at large about what they want out of a workplace.” And across the board lawyers preferred Stay firms on every non-monetary metric: 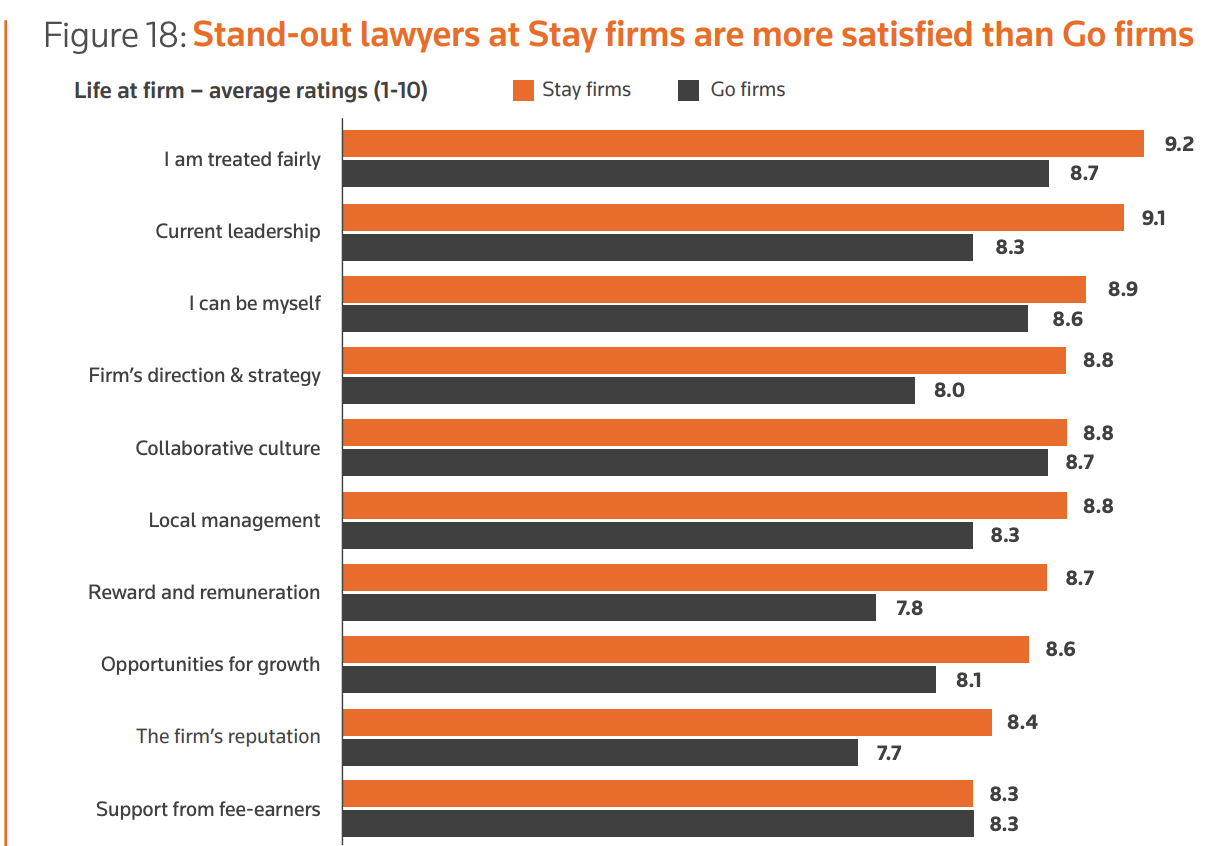 There’s probably some grade inflation in there so the gaps between the two are more important than the raw numbers.

“They said they would be happier at firms that resembled our Stay firms. They want recognition beyond cash,” Josten explained. “Cash is a part of it, but cash is the fallback position — if there’s nothing else keeping them there, then maybe they’ll leave for higher money, but that doesn’t solve underlying problems.”

Some of the most serious underlying problems apply squarely to underrepresented lawyers. While women are only slightly more of a flight risk than men, gay lawyers reported a 10 percent higher likelihood of leaving the firm than straight lawyers.

Though no category saw a greater disparity in desire to move on than ethnicity. 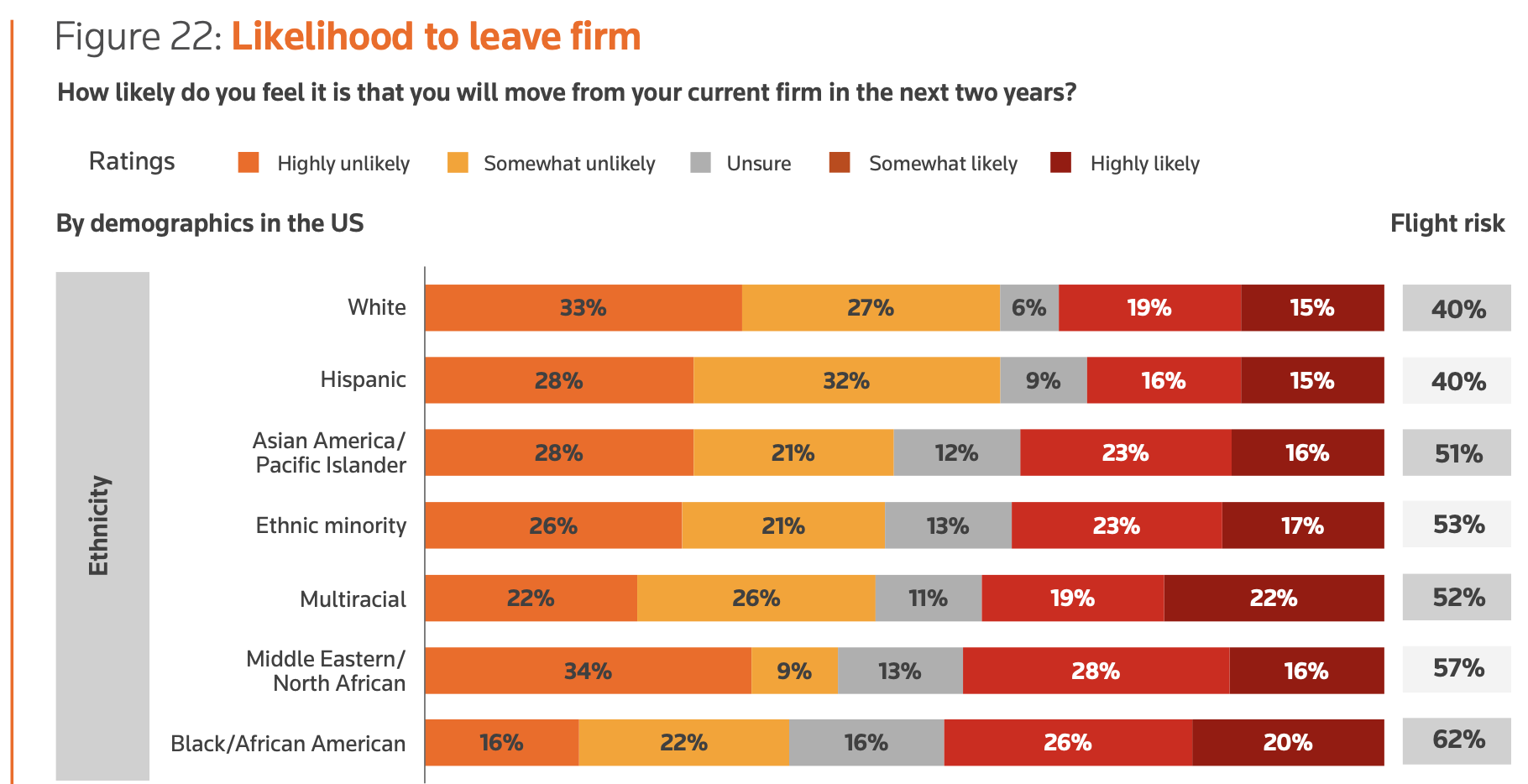 A 22 percent jump between the least likely and most likely to leave is a big deal. This is a critically important finding at a time when clients are increasing efforts to track and act upon diversity among outside counsel. The collapse of Coca-Cola’s ambitious attempt to improve diversity didn’t disrupt that trend.

“Flight risk factors are high across the board but when we see numbers like 62 percent in some categories of diversity… it’s imperative that firms get on top of that because those lawyers are already in high demand and firms are struggling to hold onto them,” Josten said. Even if a firm is content with a “Go” reputation, it needs to invest time and effort into figuring out why underrepresented lawyers are more interested in leaving because whatever they’re looking for, the firm needs to figure out how to deliver it.

There are many more insights in this report, and we’re going to have another post to talk about them. But for now, again, sign up to check out the full report here.

Earlier: Should I Stay Or Should I Go?: Law Firm Edition

How to Best Work with Your Lawyer for Positive Outcomes

How to Best Work with Your Lawyer for Positive Outcomes

The U.S. Cities Where Biglaw Associates Are The Most Satisfied (2022)