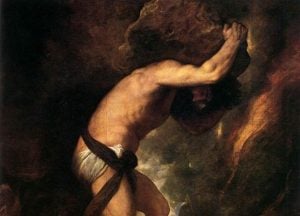 Do you know the myth of Sisyphus? He keeps pushing a rock up a mountain only to have it fall back when he gets it to the top. It’s like the legal profession with diversity, equity, and inclusion initiatives. Very slow progress up that mountain. Hopefully, unlike Sisyphus, DEI will scale the mountain and stay there, but it won’t happen any time soon.

One of the issues that the profession faces is diversity, or lack thereof, in its ranks. The State Bar of California has published its “Report Card on the Diversity in California’s Legal Profession.” The report looks at California’s lawyer population in 2022 and arrives at some not-so-surprising conclusions.

Despite a “minority majority population in the state, the attorney population still does not reflect the state’s diversity, with Latinos as “particularly underrepresented.” However, the report acknowledges that the proportion of attorneys who are women and people of color has increased.

Who represents the largest group of newly admitted attorneys? Women of color. Yay!

Since approximately 80% of California attorneys work in the private sector, the report says that “increasing the diversity in this sector alone will have a transformative impact on the profession.” We all know that it’s still mainly the men who are running law firms in the state, although that is changing (but not fast enough). Every law firm that promotes a woman to running the firm deserves kudos for recognizing that women are just as capable as men, if not more so. In fact, it was Liz Cheney, in her recent remarks at the Reagan Presidential Library who pointed out that men haven’t done such a good job of running things.

It’s no surprise that women are overrepresented in government and nonprofit sectors. Do you think that it could have anything at all to do with how difficult it is for women to generate the necessary business to move forward in the law firms? Just asking.

Another unsurprising factoid: women of color are underrepresented in leadership positions in all employment settings. Add to that the unsurprising fact that nonbinary attorneys “consistently report the lowest level of satisfaction with workplace experiences.”

What are the most desired areas for improvement? No surprise there either. Compensation and benefits. That’s true for everyone.

How to increase satisfaction for minority lawyers across the board? Professional development, a topic not touched on in law school. The State Bar’s report concludes that “women, nonbinary, attorneys of color LGBTQIA+ attorneys, attorneys with disabilities, veterans, and attorneys working in nonprofit settings rank professional development resources and support as the second highest area of the workplace that would need to increase for their satisfaction to increase.”

These groups should not be merely ATMs for partners, but if they are to be future partners and firm leaders, then firms need to spend time helping them develop their own books of business or take over existing clients when senior lawyers retire. Without business development, firms languish or even die. Clients want to know who is handling their matters; introductions and inclusion are important.

Increasing DEI is a slog. In law firms, the percentage of attorneys of color is inching close to 20%, but the percentage of partners of color lags at just under 12%. Better than it has been, but still nothing to be excited about. That’s one of the problems with incrementalism; it takes so long to see results. How long will it take before the profession looks like society at large? I’ll be taking a dirt nap.

The report suggests steps that employers can take, but again, there’s nothing new: promote transparency and accountability, build an inclusive workplace culture, retain, advance, compensate and empower staff. The recommendation for attorneys? “Empower yourself and others.” Easier said than done.

Whither the Mansfield Rule? The rule, aimed to diversify law firm leadership, has just brought forth Mansfield 6.0 and it increases the requirements for Mansfield certification. Here is the latest iteration:

“[T]he 6.0 version requires law firms to consider at least 30% historically underrepresented lawyers from all four groups (women lawyers and underrepresented racial and ethnic lawyers, LGBTQ+ lawyers and lawyers with disabilities) when appointing to leadership roles and promoting into the equity partnership, among a dozen other activities that focus on the path to leadership. Firms must also consider 30% underrepresented talent for C-suite roles. Firms are asked to share lessons learned with each other through monthly knowledge sharing forums. They must create and publish job descriptions for leadership roles. They must continue to meet routine check-in, data-collection, and reporting milestones.”

Clients want and are now demanding diverse attorneys working on their matter, as this exchange on Fishbowl shows. Read the entire thread; it’s eye-opening for those who don’t think that diversity matters in law firm selection. It does now and that requirement will only increase. It’s no longer a matter of lip service.

And please don’t use the class of incoming SCOTUS clerks as any sort of DEI model to emulate. This class is 84% white; contrast that with law students, who are a much more diverse cohort. So, what does that percentage say about this Supreme Court? Probably nothing that hasn’t already been said. Justice Ketanji Brown Jackson will undoubtedly mix it up going forward. I can’t wait.

Financial ‘Doom And Gloom’ For Biglaw? Maybe Not!

Why, I’ll Got Y’All Bonuses (Another Firm Match… Do You Get It?)

Financial 'Doom And Gloom' For Biglaw? Maybe Not!

Are You A ‘Modern Lawyer’?

Starting now, the GRE can replace the LSAT in law school admissions

Leaving Biglaw In A Quest For Happiness