The Summer Of Their Discontent 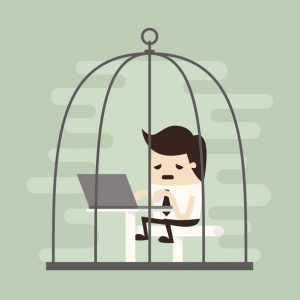 The beginning of a new academic year at Vanderbilt Law School makes me think of the famous line from Richard Linklater’s seminal film “Dazed and Confused” in which Matthew McConaughey’s character Wooderson remarks that he likes crashing high school parties because “I get older, they stay the same age.” Even though parenthood is aging me quicker than two terms in the White House aged Barack Obama, the new class of Vanderbilt 1Ls remains impossibly young each year.  This temporal fact was hammered home recently when during my introductory Career Services session with my cohort of 1Ls, I joked that my Biglaw experience might not be germane to what they could expect since it had been 15 years since I had been a summer associate, back when they were in middle school.  Some audible sniggering and quick mental math made me realize my error as 15 years ago most of these students were just starting ELEMENTARY SCHOOL.

Working with young law students provides a challenge that will only grow as I continue to get older. I want to communicate with them in their own vernacular, but there’s a fine line between being conversant in present-day lingo and becoming the Steve Buscemi meme from “30 Rock.“

A modern term I have come to embrace is “vibes.” While some might want to think of it as a synonym for mood, vibes seem to have a more all-encompassing usage. This greater universality describes the term and its ubiquity in the culture.  The concept and proliferation of vibes have become a regular topic in the pages of this country’s leading publications. But the utilization is not merely limited to David Remnick-helmed periodicals, instead, vibes have been used by high-profile commentators to describe the nature of everything from the global economy to the U.S. midterm elections to the NBA.

We’re not at the point where the Fed will entertain a pivot, even if CPI comes in soft, but the vibes around markets and commentators post-UK mini budget are different than they were between the March and September FOMC meetings.

Not surprisingly, the vibes lens can be applied to the legal world as well. One of the many hats I wear at Vanderbilt Law is serving as the director of alumni advising. In that capacity, I get a chance to interact with Vanderbilt Law grads both recent and of a more-dated vintage. As one might expect, the bulk of these interactions is with alums who are looking to make a professional change and seeking guidance. But a strange thing happened over the course of this past spring and summer. An abnormally high number of students who had just earned their J.D. and entered the legal workforce reached out to share their extreme discontent. Before delving much further, I will caveat everything that is about to be said with a note that the overwhelming number of recent grads seem content in their current positions, and with the odds of a recession in the not-too-distant future seemingly growing every day — or at least with every interest rate hike by the Federal Reserve — even those young lawyers who are not thrilled with their current professional opportunities might keep those concerns to themselves to ensure continual employment in the face of a contracting legal market.

But that all being said, it is useful to discuss the root of this young lawyer malaise.  Not just because the airing of grievances can be healthy, even if we are not yet in the Festivus period, but also because it can be instructive to both current law students and even legal employers about what might be erecting roadblocks in the careers of recent law school graduates.

Not surprisingly, the issue I heard most frequently from these recent alums dealt with the hours that Biglaw demands from young attorneys. Trying to make clear to law students the sheer amount of hours that one works at a large law firm has always been a challenge for me in my current position. Even once someone can wrap their head around the concept of a billable hour or billing in six-minute increments or how you can be in the office but that does not automatically mean you are working, trying to understand just what billing 2,000 or 2,500 or 3,000 hours entails is remarkably challenging. And this is true for the K-JD students as well as those who worked before coming to law school as a 9-5 office job bears little resemblance to working as a Biglaw associate. For years, it had been taken as gospel that the high salaries of Biglaw would be a sufficient salve for the long hours that associates were working. But my conversations with these students have made me question that conventional wisdom. Those who wanted to stay in private legal practice were willing to go to a smaller market, even if that meant accepting a lower salary, so long as they had a slightly better work/life balance.  And some of these recent grads were eager to abandon the law firm lifestyle altogether, even if that meant seeing their take-home pay slashed to a fraction of its current level.

For those who could handle the long hours, the other consistent concern I heard from recent alums was that the work that they had was not what they were expecting. This issue was not focused on the sophistication, or lack thereof, of the work that is given to junior associates, but rather, the practice areas they were working in, or the matters to which they had been assigned, were either not what had been promised or were no longer of interest to them. If you join a firm expecting to do appellate litigation, and you suddenly are put on a bankruptcy team, that sudden change can sour you on the firm, especially when you are then putting in the long hours referenced above. In the same way that law students need to be better aware of the time commitment they are agreeing to when joining Biglaw, they also need to realize that they are but a resource in a much larger entity and that resources can be reallocated at a moment’s notice for the betterment of the entity. However, while I do not think law firms can do much about the hours that junior associates have to work — that is just the business model — there are concrete ways that law firms could ensure that junior lawyers are able to have some influence on the matters in which they work, including a movement away from the siloing of entry-level attorneys into a particular practice area and, instead, allowing a more open assignment system.

Lastly, while not a universally held complaint, a number of the recent grads I have spoken to had employment issues that had nothing to do with their particular employer, but rather were geographic issues. Going to a new city that you have never lived in for any period of time while in school, outside of, potentially, one summer during law school, can be difficult for many people. But that difficulty is only compounded when you add in the stress of being a junior attorney. And there is another wrinkle. Much has been written about the political geographic sorting of Americans. Maybe it is taking place. Maybe it isn’t. But spend five minutes watching the news, or on Twitter (while you still can), and you can see there is a deep partisan divide in this country. A number of the recent Vanderbilt alums I spoke with — again, a very small portion of the overall universe of graduates — felt out of place or not supported in their new geographic location. This sense of dislocation and lack of community support means that young associates will not want to establish roots.

Much like the predecessors, speaking to, and working with, the Class of 2025 — which still sounds like something that is so far out in the future it should be in a science fiction movie — fills me with a tremendous sense of joy and professional achievement. It is, far and away, the best part of my job. And while I thoroughly enjoy working with Vanderbilt Law alumni as well, my goal, and indeed the goal of this industry on both the law school and law firm side, should be to help create an environment that is welcoming and positive for young lawyers so that the vibes are positive when this class enters the legal world.

Nicholas Alexiou is the Director of LL.M. and Alumni Advising as well as the Associate Director of Career Services at Vanderbilt University Law School. He will, hopefully, respond to your emails at abovethelawcso@gmail.com.

The Most Recalled Vehicles in the U.S.

The Most Recalled Vehicles in the U.S.

Lawyer on university faculty is charged with insider trading