The Who’s Who Of Kinney Recruiting: Daniel Roark 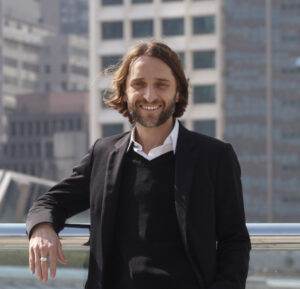 As Managing Director of the Texas offices of Kinney Recruiting, Daniel Roark has placed scores of attorneys in major markets across the globe. He’s also done it from various places, including at home in Austin, Texas, and Guanajuato, Mexico, walking along Paseo de la Reforma in Mexico City, and recently on a bicycle in Burgundy, France. “I’ve been in this industry for 15 years and I’ve taken calls in just about every setting and at all hours possible. I once prepped a candidate for an interview while shivering in a tent in Iceland. Once I had to hike up to the peak of a remote village in Mexico to get cell reception. This freedom of location is one of the great parts of our job. If I’m not traveling for work, it usually accompanies me on the road or at one of my races.”

Daniel grew up in Houston, Texas, in a family of lawyers, doctors, and teachers. His grandfather, Alfred Roark, was incredibly influential in his life and first introduced him to law when he was a teenager. “Some friends and I started a business DJ’ing school dances. My grandfather drafted a one-page contract that I could use to formalize our engagements. This simple document felt really important to me because it leveled the communication between young teenagers and the adults who would hire us.” Daniel’s grandfather helmed legal operations for a successful Houston energy company, but he didn’t get there through law school. “In my grandfather’s day, one could sit for the Texas Bar and become a licensed attorney without going to law school. That has since changed but my grandfather was a very diligent, studious individual. He was serving a term as a representative in the Texas Legislature, and he used the time to also study for the Bar and become a practicing lawyer. It was ingrained in me from an early age that a legal education is something worth pursuing.” Daniel set his sights on the University of Texas, where he received his BA in English Literature with a minor in Business. Following his undergraduate studies, he spent two years with Teach For America in the Rio Grande Valley teaching fifth grade just a few miles from the US-Mexico border. From there, he continued his educational endeavors abroad, teaching English in the accounting department of the University of Guanajuato in Guanajuato, Mexico. With his love for communications, reading and analysis, law school was a natural fit, and he returned to the University of Texas School of Law where he obtained his JD and spent a semester abroad in Buenos Aires, Argentina. He went on to join the Houston office of the international law firm of Akin, Gump, Strauss, Hauer and Feld as an associate in the Global Projects Group.

A few years later, Daniel decided to return to Austin (before it was cool) and he contacted a recruiter to help him do it. He lateraled to Clark, Thomas and Winters, formerly the largest law firm in Austin. “I had very positive experiences at two fantastic law firms, but I understood being a successful corporate lawyer requires a time and intellectual investment that is all-encompassing. I had other interests outside of my legal practice that I was interested in pursuing, including finding a career that allowed me to apply some of the skills I had acquired but in a more flexible way. Before I was a practicing attorney, I was entirely unaware the legal recruiting industry existed. After working with a professional recruiter, I wanted to learn more about it.” Daniel called his contacts to inquire about legal recruiting and kept hearing Robert Kinney’s name. “I chased Robert down, joined the company two months later, and now after 15 years I still feel like we have so much more to do. At Kinney Recruiting, I’ve had the chance to work with the highest caliber of legal professionals and travel the world. Our work has taken us to markets including London, Brazil, Moscow, Hong Kong, Mexico, Singapore, Germany – the list goes on. We’ve really invested time and resources into many legal and financial centers in the world and worked to develop relationships in those markets. Robert’s always had a global vision for the company, but our company success is also contingent upon us owning our backyard, which is Texas and the US.”

The biggest change Daniel has seen since joining the industry has been what technology has allowed legal recruiters to do, both nationally and internationally. “We were forebears to remote work, digital nomad realities, and now our clients and candidates are operating in more of the same manner. Our proprietary database, network, and research and analytical arms stem from a forward-thinking technological approach that makes us unlike any other recruiting firm. But ultimately, effective communication is our trade. We interact with people at the forefront of legal practice, and we learn a tremendous amount substantively. And it’s remarkable to have access to professionals who are industry leaders. But these exchanges are only valuable if we, in turn, offer market knowledge and expertise, which we have invested a considerable amount of time, resources, and old fashioned legwork to accrue and develop.”

It wouldn’t be Daniel if his favorite placement to date didn’t include some excitement, a little travel, and a lesson behind it. “My favorite placements have very little to do with fee size or prestige. Perhaps my favorite was representing a major US corporation eager to hire a regional counsel in Mexico City to oversee the company’s Latin America operations. The client and I had arranged a day for executives to fly down to Mexico City to interview several qualified candidates. But on the morning of the interviews, I felt like I’d missed something (or someone). So I kept working to make sure I had uncovered every stone. I ended up reaching a candidate who didn’t exactly fit our job profile, but who had tremendous promise. By this time it was already afternoon in Mexico City and my clients were leaving for the airport later that evening. I called the client in their meetings and they agreed to see the new candidate if he could arrive immediately. I notified the candidate and the race was on. His fiancée fetched him from his office with a sport coat in tow, sprayed him with a dash of cologne, and drove him across Mexico City in rush hour traffic to get him to the interview. The candidate made it in time and was soon offered the job which significantly changed his life and that of his fiancée. This experience taught me a valuable lesson: our job isn’t finished until it’s fully finished. And you have to see it through to the very end.”

When he isn’t stamping his passport and racing across the world, Daniel is in Austin helping oversee legal operations for Guitars for Africa, an organization dear to his heart that he co-founded in 2013. Partnering with several accomplished music industry professionals and a former US Ambassador, they created a charity that provides musical instruments and instruction to underprivileged children in Eswatini (formerly, Swaziland), Africa. “Our mission is to simply get instruments into the hands of those who don’t have access to them. We’ve since expanded our efforts to other areas including Nairobi, Kenya and Mauritania.”

While teaching elementary school with Teach for America, Daniel experienced what it was like to become truly invested in other’s lives. “With teaching, you start to see the potential in others, namely your students, and it becomes as clear as day how much they are capable of. You also realize how much others have invested in you and become grateful for all those opportunities, big and small, that you have been gifted along the way. Obviously in legal recruiting, our candidates are extremely motivated and most have accomplished more in their legal careers than I ever did. And some candidates already know what they want and we can be efficient in helping them achieve their defined goals. But others have less clarity and it’s gratifying to see the potential in a candidate and guide them towards something better for them. One would think younger attorneys at the beginning of their careers might require the most guidance, but often our greatest advocacy efforts are working with highly successful law firm partners who need a push or an expert perspective outside of their own.”

As he divides his time between representing candidates in their career moves and prepping himself for his next big race, it’s clear that Daniel isn’t slowing down any time soon. “Our industry is so dynamic that I am constantly challenged and learning. And the further I am removed from practice, the more respect I have for attorneys because the commitment required by the legal profession is more demanding than ever. I feel tremendous responsibility in representing the interests of these professionals. But I also know that my colleagues and I have worked extremely hard over many years to become the very best at what we do.”

After overcoming his initial difficulties in the Atacama Desert, Daniel has gone on to run ultramarathon races in Nepal, Patagonia, Iceland, the Republic of Georgia, and across Europe and the US. Some to better results than others, but that’s not really his motivation. “I just want to see as much of the world as I can, preferably on my two feet. And I now know there are going to be some good days and bad whether on the trail, in business or in life. Sometimes you face troubles and all you can do in that moment is sit behind a rock and regroup. But at some point you have to get back up and keep moving. And after a few steps (or a push from another), everything gets easier and eventually you’ll reach a place you could have never anticipated.”

Biglaw Firms Thinking About ‘Cleaning Up’ Their Ranks

More Associate Cuts Ahead Thanks To Biglaw’s Negative Financial Outlook

An ‘Unprecedented’ Project: How ATL Delivered Extraordinary Results In A Client Partnership