This U.S. Senator Wants To Keep America Free By Banning TikTok From Your Phone 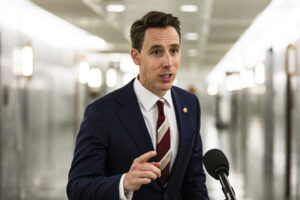 TikTok is more than just a dance app. To young people, it is a news source. For others, it is a security risk. Just look to Kentucky, Wisconsin, and North Carolina — all three states are adamantly against downloading the app to government-owned devices for fear that secure information could be snatched by it. U.S. Senator Josh Hawley, also known as that one guy who kept grilling KBJ during her confirmation hearings, is pushing to ban the app from being accessible to everyone in the Red, White, and Blue. From Reuters:

Hawley, a Republican and China hawk, said on Tuesday that he would introduce a bill to ban the short video app TikTok in the United States.

TikTok, whose parent is the Chinese company ByteDance, already faces a ban that would stop federal employees from using or downloading TikTok on government-owned devices.

“TikTok is China’s backdoor into Americans’ lives. It threatens our children’s privacy as well as their mental health,” he said on Twitter. “Now I will introduce legislation to ban it nationwide.”

For what it’s worth, he is not the first to suggest that TikTok is not the best app for maintaining mental wellness.

Watching this woman use highly conductive stainless steel to fry her hair like yakisoba noodles was the moment I knew I needed to permanently delete TikTok for my mental health pic.twitter.com/5Lk5RmvVJW

We should also take the time to think critically about what is actually objectionable about TikTok. Does it truly pose unique problems, or is it being scapegoated as a way to ignore similar problems that exist elsewhere? In one of those rare-to-find moments, TikTok was actually prepared to respond to Hawley:

TikTok said in a statement that Hawley was taking the wrong approach.

“Senator Hawley’s call for a total ban of TikTok takes a piecemeal approach to national security and a piecemeal approach to broad industry issues like data security, privacy and online harms,” said spokeswoman Brooke Oberwetter. “We hope that he will focus his energies on efforts to address those issues holistically, rather than pretending that banning a single service would solve any of the problems he’s concerned about or make Americans any safer.”

They probably have a point about this being a piecemeal approach to much broader issues. While nobody doubts that TikTok hosts propaganda, that alone hardly singles it out from other social media sites like Twitter and its propagandizing for the Pentagon, Facebook and its associated risks to democracy, Parler’s coddling of insurrectionists, and the like. Maybe once TikTok is dealt with, we can begin to deal with actual domestic threats to safety and privacy at home — we can’t blame TikTok for The Scottsboro Boys case or the normalization of the surveillance state, even if they do host the content.

The white girls on tiktok have been doing this trend where you act like you are crying and then stop. The sound they are using is full of them pretending to cry. A lot of Black people are calling them out and showing how white women’s tears have been weaponized against us. pic.twitter.com/wBw5IzGA7c

Cop propaganda shows are so powerful. I just saw a tiktok of people acting like it was some kind of “good idea” to run peoples DNA when they die so cops can “solve” open cases. People really think DNA evidence is a whole other thing than what it is and this impacts juries.

Ultimately, and here’s the more traditional legal take — I think that the low-nuance-China-bad-let’s-ban approach has some unsavory implications for how we deal with free expression. TechDirt wrote a compelling article responding to the idea of banning TikTok from a much smaller set of America — college campuses. Here’s an excerpt:

The Washington Post, for example, penned a piece last Friday highlighting how the evidence justifying banning TikTok on college campuses is largely nonexistent. There’s no evidence that China is using TikTok for influence at any scale, and TikTok’s just one of thousands of international companies and services exploiting our consistent lack of meaningful privacy oversight in the U.S.

Above, I made “even if” arguments about the prospect of China controlling the minds of American youth through the dance app. That said, you have quite the mountain to climb if you don’t take China’s nefarious intervention as axiomatic. I wager that the larger threat is our own education system’s burgeoning allergy to the truth — just take Florida’s bans on the terms “global warming” and “climate change.”

Academics also note how the bans are counterproductive to education, especially if you’re a media studies professor. They’re also quick to point out that such bans run counter to many of the values Americans profess to hold about open markets and free expression.

Home of the Brave and Land of the Free except when it comes to the app store is not a catchy slogan. Before we get too banhappy about people consuming the content they want to, maybe we should start having frank discussions about the values that we hold as a people. Soon enough, we’ll run out of things to ban. They already took dictionaries away from us.

Stuck Drafting A Tough Brief? This Tool Can Help.

Stuck Drafting A Tough Brief? This Tool Can Help.