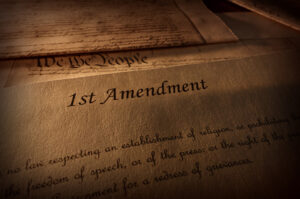 Three University of Idaho law students have filed a lawsuit against the school alleging they were discriminated against by school administrators over the expression of their religious beliefs.

According to the complaint, it all began with an anti-LGBTQ+ slur written on a whiteboard at the University of Idaho’s Boise campus (which ironically, is not part of the alleged discrimination). In response to the incident, the UI College of Law on the Moscow campus held a “moment of community” and members of the Christian Legal Society attended. While there, court documents reveal that another student asked the CLS representatives turned plaintiffs why the organization requires its officers to affirm that marriage is between one man and one woman. Plaintiffs say they explained it’s based on a biblical reading of sexuality and one of the plaintiffs, who is the president of the CLS chapter, says he offered to discuss it further with the student.

As reported by the Moscow-Pullman Daily News, this was not the only interaction between the student and members of CLS:

Not long after the exchange, the unnamed student and several others denounced the chapter’s actions at a panel with the American Bar Association. A member of the Christian Legal Society at UI who attended the meeting countered the statements and argued the biggest discrimination on campus was against the group for its religious beliefs.

After that, plaintiffs say they received no-contact orders from the university’s Office of Civil Rights and Investigations under the school’s Title IX Sexual Harassment Policy and its Code of Conduct and Disciplinary Policies, preventing them from having contact with the student that approached them at the moment of community event. That, they argue, is the crux of the discrimination claim.

The plaintiffs are represented by attorneys at the Alliance Defending Freedom who made this statement about the case:

“Students of all religious and ideological stripes must be free to discuss and debate the important issues of our day, especially law students who are preparing for a career that requires civil dialogue among differing viewpoints,” said Michael Ross, legal counsel at the nonprofit. “Yet the University of Idaho is shutting down Peter, Mark and Ryan because of their religious beliefs. This is illegal behavior from any government official, and we urge the university officials to right their discriminatory actions immediately.”

Jodi Walker, senior director of communications at the university, wouldn’t comment about the specific allegations in the complaint, but noted that no contact orders are a potential supportive measure available to students:

Under Title IX, schools must offer supportive measures to a complainant, whether or not a formal complaint is filed.

How to Legally Handle Toxic Chemical Exposure at Work

Why Risk Not Knowing What’s In Your Contracts When This Product Can Show You Everything?