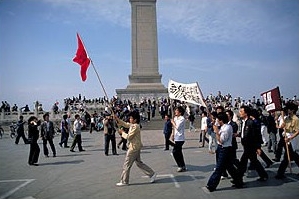 Jinjin (Jim) Li, 66, was an immigration attorney in New York. He settled in the city after seeking asylum — he spent two years in a Chinese jail for participating in the 1989 Tiananmen Square protests. Yesterday, he was fatally stabbed in his Flushing, NY, office.

Li suffered stab wounds on his neck and body. Though he was rushed to Elmhurst Hospital, he succumbed to his wounds.

Xiaoning Zhang, 25, was arrested on murder charges. Friends of the victim have speculated the Li would not take his attacker on as a client and that was motivation for the attack:

“He didn’t want to take her case. There was no reason to kill him. She came here last Friday and made a scene. The office called police but she ran away,” [friend and lawyer Wei (Wayne) Zhu] said.

“That probably triggered her anger. Today she came with a knife, with the intent to kill him,” he alleged.

Zhu also expressed shock over the attack, “I can’t believe it. She not only destroyed his life, but the hope of our community. He wanted to realize democracy in China. He will never realize that dream.”

Above the Law extends our condolences to the family, friends, and colleagues of Jinjin Li.

Lawyers are all about camaraderie, civility and coin tosses

Are You A Capital Markets Associate Looking For A Broader Practice?