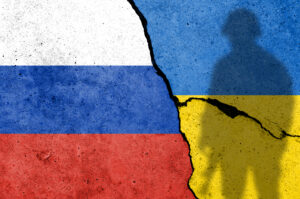 After two straight weeks of legal technology shows — first the ABA TECHSHOW in Chicago and then Legalweek in New York — I’m chock-full of legal technology insights. You’ll be reading and hearing about them over the coming weeks because there’s far too much to cover in a handful of articles.

But one thing that loomed over both shows, in addition to the joy of finally seeing people at a large event again, was the anxiety of Russia’s invasion of Ukraine.

To an outside observer, it might not seem like an escalating war in Eastern Europe would have any connection to legal tech trade shows. But that overlooks the massive boom in programming capacity in Ukraine. The IT sector in Ukraine was growing rapidly and many companies set up offices to take advantage of lower cost expertise in the country.

The products you’re using might have been built with the help of Ukrainian programmers. Your after-hours help desk might have been in Ukraine. Despite being considered the “breadbasket of Europe,” Ukraine had a rapidly expanding computing sector with deep ties to other European and North American companies.

While meeting with Alex Babin, CEO of ZERO, about the company’s growth to around 85 employees, he shared a window into the unexpected stress the company dealt with over the past few weeks trying to get its Ukraine-based employees successfully evacuated. It’s not a task anyone expects to tackle when they sign on to building software to help lawyers improve efficiency. Babin said they’d managed to get everyone out at this point.

Onit CEO Eric Elfman had an even bigger contingent in the country. AXDRAFT, one of Onit’s subsidiaries handling document automation, employed over 60 people in Ukraine. All of its team members in Kyiv are accounted for and safe as of now. Nick Whitehouse, general manager of Onit’s Center of AI Excellence, told me that people in America don’t really understand how critical Ukraine’s IT sector has become.

And these weren’t just the only two interviews where it came up. There were other vendors, as well as customer attendees, dealing with threats to their co-workers. The invasion of Ukraine is a humanitarian crisis across a number of dimensions, but last week — in New York — we got to see a little bit of how it directly impacts a sector of the legal industry.

Why is It Important to Register Your Trademark?

What Determines a Good Attorney?

What Determines a Good Attorney?