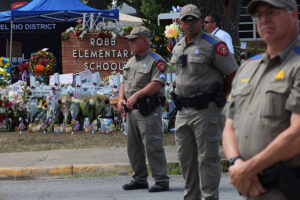 The Uvalde Police Department — recipient of 40% of the city’s budget — botched its response to a mass shooting at Robb Elementary School. Rather than rush to the sound of gunfire, the officers stopped making forward progress once they were adjacent to the gunfire. It took another law enforcement agency (a Border Patrol tactical team) to end the killing, which at that point numbered 19 students and two teachers.

As new, and embarrassing, details continue to leak out, the Uvalde Police Department has tried desperately to stop the steady drip. It has decided to simply refuse to respond to nearly every one of the hundred-plus school shooting-related requests it has received. (The PD is also refusing to cooperate with a federal investigation of the shooting, so it’s not just stonewalling taxpayers.)

And it has benefited from an unexpectedly united front. The Texas Department of Safety has come to the defense of the extremely defensive Uvalde Police Department, claiming any information or documents it might have on hand relating to the shooting response (including body cam footage) cannot be released because it might (and I quote) “enable criminals to anticipate weakness in law enforcement procedures.”

The procedure was the weakness, at least as carried out by the Uvalde police officers. Training tells first responders to sacrifice their own safety to protect others during active shooter situations, but that simply did not happen. The department’s immediate statements portrayed officers as heroes, an illusion the PD couldn’t even manage to sustain for 24 hours.

The Uvalde PD clearly does not want to release any information about its botched shooting response. As Jason Koebler reports for Motherboard, the PD has retained private representation to engage in legal warfare on its behalf, spending the public’s money to keep documents out of their hands.

The City of Uvalde and its police department are working with a private law firm to prevent the release of nearly any record related to the mass shooting at Robb Elementary School in which 19 children and two teachers died, according to a letter obtained by Motherboard in response to a series of public information requests we made. The public records Uvalde is trying to suppress include body camera footage, photos, 911 calls, emails, text messages, criminal records, and more.

“The City has not voluntarily released any information to a member of the public,” the city’s lawyer, Cynthia Trevino, who works for the private law firm Denton Navarro Rocha Bernal & Zech, wrote in a letter to Texas Attorney General Ken Paxton. The city wrote the letter asking Paxton for a determination about what information it is required to release to the public, which is standard practice in Texas. Paxton’s office will eventually rule which of the city’s arguments have merit and will determine which, if any, public records it is required to release.

Hiring outside counsel isn’t necessarily unusual when plenty of litigation appears inevitable. What is a bit more unusual is the private law firm’s approach to the public records requests. Rather than present reasons why certain documents and recordings might be exempt from disclosure, it has chosen to treat all requests as one inseparable mass to which any or all possible exemptions might apply.

The city says that it has received 148 separate public records requests (including several from Motherboard), and has lumped all of them together, making a broad legal argument as to why it should not be required to respond to many of them.

That’s the pitch the law firm is making to state Attorney General Ken Paxton, hoping the AG will take its side and declare most of those 148 requests exempt from release. That may work with the AG but it’s certainly not going to work in court when the inevitable lawsuits over denied requests start flowing in.

But that’s the point. It buys the Uvalde PD more time. It forces requesters to spend their own time and money suing for access to records by battling a private law firm being paid with public money to help the Uvalde PD screw the public.

This raises questions about what might be captured in documents and body cam footage. The concerted effort to prevent any information from being released gives the distinct impression this is a cover-up operation. What it’s covering up is left to the imagination of the general public, which is no closer to obtaining access to the stuff the PD is keeping hidden. Are there falsified reports? Cops caught on camera cowering-in-place? Cops mocking the terrified families waiting outside of the school? Confusion? Chaos? Panic? Law enforcement professionals being far less heroic than they believe themselves to be?

Whatever it is, it will come out eventually. This is the PD delaying the inevitable. And the longer it fights, the more irate the public will be. The PD has been dishonest from the outset. Now, it’s using the public’s own money against them.

California Seems To Be Taking The Exact Wrong Lessons From Texas And Florida’s Social Media Censorship Laws
Republicans Announce That If Content Moderation Is Written Out Of Antitrust Bills, They’ll Pull Their Support
Too Little, Too Late, WTO Finally Eases Patent Rights On COVID Vaccines

Workers in Harlingen Need to Know These Common Forms of Discrimination

A Peek into Merger and Acquisition