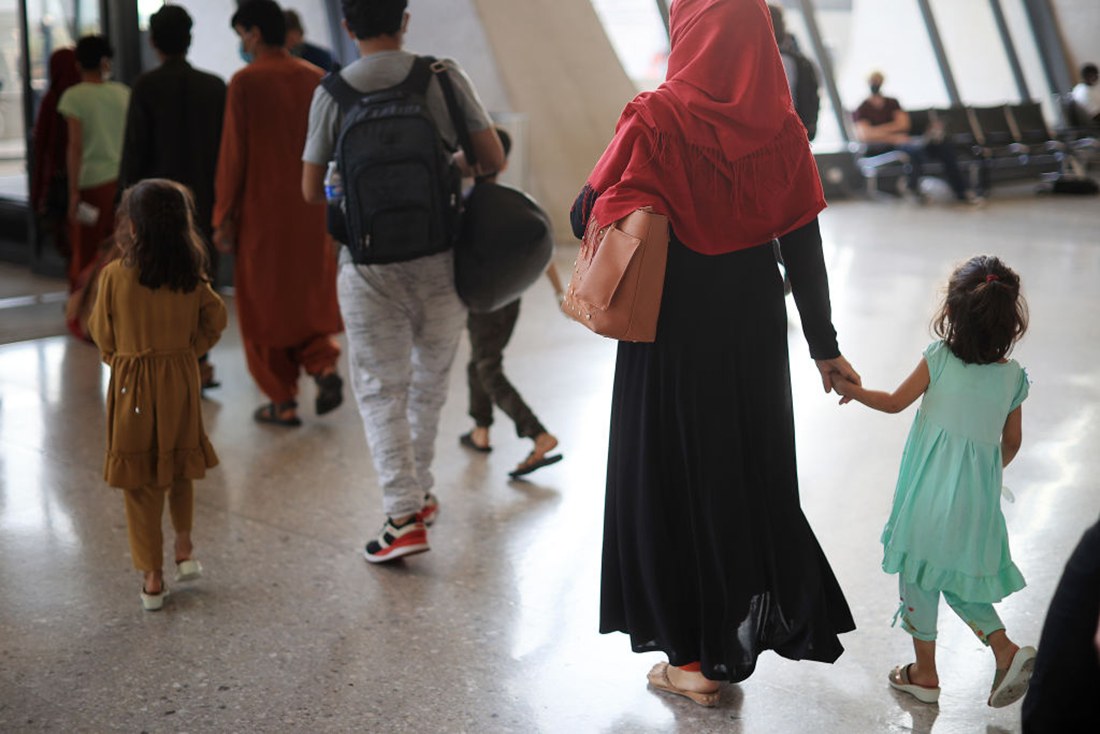 Refugees arrive at Dulles International Airport in Virginia after being evacuated from Afghanistan in August. Photo by Chip Somodevilla/Getty Images.

The ABA House of Delegates passed a resolution at the ABA Midyear Meeting on Monday that supports vulnerable Afghans who are seeking humanitarian protections in the United States.

Resolution 608 calls on the Biden administration to continue helping citizens of Afghanistan who worked with the American government leave their country and to facilitate their prompt admission to the United States by streamlining the adjudication of their applications for status and related benefits.

• Urges the federal government to assist in the exit of Afghan lawyers, judges, journalists, academics and educators—and particularly women and girls within those groups—who may be at risk because of their contributions and to promptly adjudicate their applications for status and related benefits.

• Supports measures to ensure that Afghans paroled into the United States are eligible for lawful permanent resident status under the same criteria available to individuals who are processed abroad and admitted as refugees.

• Urges Congress to quickly authorize appropriations to facilitate and streamline the process for Afghan nationals who are paroled into the United States and seeking adjustment of their status to lawful permanent residence.

• Encourages all relevant federal agencies to take steps to facilitate and support additional humanitarian protections for people from Afghanistan and to streamline the processing of any available immigration benefits.

Follow along with the ABA Journal’s coverage of the 2022 ABA Midyear Meeting here.

The United States ousted the Taliban from power during its invasion of Afghanistan in 2001. But after the Biden administration announced plans to withdraw all U.S. troops from the country by Sept. 11, 2021, the Taliban recaptured Kabul and other major cities and forced the rapid evacuation of thousands of American citizens, lawful permanent residents and at-risk Afghans.

Karen Grisez, a past chair of the Commission on Immigration, told the House of Delegates that despite the ABA’s recent efforts to assist individuals and families from Afghanistan, which include the creation of the Afghanistan Response Project and Afghanistan Professionals Resettlement Task Force, the U.S. government has to step in with critical, additional actions.

She explained that the resolution will provide policy that permits the ABA to advocate on behalf of Afghans in three locations.

“First, those still in Afghanistan and in imminent danger from the Taliban, in need of our assistance to escape to safety,” said Grisez, who is also the American Immigration Lawyers Association representative to the House of Delegates. “Second, those who have made it to third countries, including lily pads and other temporary host countries, but who face multiple obstacles and massive backlogs before being admitted to the U.S. And, finally, those who already made it to this country but confront procedural barriers and delays in achieving protection and permanent status.”

A U.S. Citizenship and Immigration Services spokesperson told the Los Angeles Times in November that nearly 70,000 Afghans had been paroled into the United States while an additional 20,000 had applied from outside the country, according to the report accompanying the resolution.

Afghans who are granted a two-year parole status can apply for work authorization but must obtain another form of lawful immigration status if they wish to remain permanently in the United States. In September, Congress directed the Department of Homeland Security to expedite the asylum cases of Afghans who entered the country through the parole process.

Col. Linda Strite Murnane is the National Conference of Specialized Court Judges representative to the House of Delegates but spoke in favor of the resolution in her personal capacity. She served with the U.S. Air Force for nearly 30 years, during which she deployed multiple times to help with operations overseas.

“I urge you to vote in favor of this resolution to allow the many Afghans who stood beside us in support of the promise of a better tomorrow,” Murnane said. “I rise on behalf of Afghans whose lives are now in danger because when our nation asked them to assist U.S. Special Forces, they said yes. I ask you to vote in support of this resolution because it is a matter of honor.”

Judge Vanessa Ruiz of the District of Columbia Court of Appeals also spoke in favor of the resolution. She specifically focused on the plight of female judges, many of whom went into hiding after the Taliban released prisoners who were sentenced by the judges and now seek retribution.

Ruiz, the immediate past president of the International Association of Women Judges, said she expected that female judges would be provided a safe exit from Afghanistan and swift resettlement in the United States.

“But we were wrong,” Ruiz said. “What we have encountered is a system that was not designed for a crisis of this nature or magnitude. Not surprisingly, it has failed to meet the moment.”

“We have received the generous assistance of pro bono lawyers eager to help, but even the most committed and energetic lawyers cannot [help] their clients reach safety and build new lives if the system in place is not up to the task,” she added. “It needs to be fixed.”

An Afghan Adjustment Act could allow Afghan parolees to apply for adjustment of their status after one year in the United States, the report says. Congress has not introduced this specific bill, but it has passed similar legislation granting people from Cuba, Vietnam and other countries who were paroled into the United States the opportunity to seek lawful permanent resident status.

Resolution 608 is co-sponsored by the Commission on Immigration and Section of Civil Rights and Social Justice.

ABAJournal.com: “The ABA is working to help Afghan refugees, and so can you”

ABAJournal.com: “Interested in helping Afghans apply for asylum? Here’s a way to start”

What are the Reasons Insurance Claim Denials Happen in Key West?

What are the Reasons Insurance Claim Denials Happen in Key West?

Live At The Non-Event: Get Your Practice Management Swag!

5 People You Need to Hire for Your Law Firm