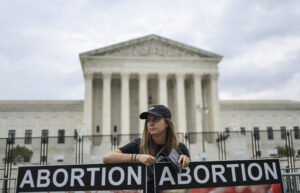 In the wake of the Supreme Court’s demolition of reproductive freedom precedent, a number of employers (including a bunch of law firms) have decided to cover the travel costs of employees, should they seek an abortion or other banned procedures in jurisdictions where they’re no longer legal. But only one — Biglaw firm Sidley Austin — received a letter from the ironically named Texas Freedom Caucus threatening a number of repercussions over the policy.

Now, as reported by Bloomberg Law, the White House has weighed in on the threatening letter, with assistant press secretary Alexandra Lamanna saying, “These punitive actions and extreme proposals from elected Republicans are exactly what the President has been warning about.” She continued:

“The Supreme Court’s outrageous decision,” Lamanna said, “has given these Republican officials the green light for a radical agenda—including a nationwide abortion ban passed by Congress—and they are accelerating their agenda to take away Americans’ rights, now attacking the Constitutional right to travel between states at will.”

Although some media reports have posited that the letter from the Texas Freedom Caucus was a warning to all Texas firms, it is not, in fact addressed to all Texas firms. Just Sidley. And that’s despite numerous Biglaw firms with offices in Texas coming out and saying they’d also pay for travel costs if an employee wants abortion care. Indeed, according to the Caucus’s own website, the only threatening letter they’ve sent out — to any employer at all — has been to Sidley.

Inspired by an email from a tipster, this fact got me thinking about why Sidley was targeted. The most prestigious law firm in Texas, Vinson & Elkins, has also pledged to pay for employees’ travel expenses, but curiously, haven’t been threaten like Sidley. Kirkland & Ellis is the law firm that makes the most money and will also cover travel costs, and… no letter. Could it be, and this is speculation, that of the prestigious law firms in Texas, only a few have women leading them? Hence that letter, addressed to Sidley’s Yvette Ostolaza.

Insults Are Undermining Your Civil Rights