We’re Still Mad, Actually: An Open Letter To The Legal Profession From A COVID-19 Bar Examinee 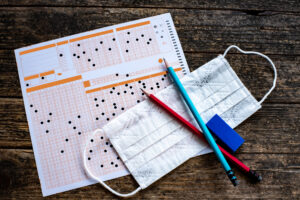 Ed. note: Please welcome Liz Gil to the pages of Above the Law. When she’s not writing about licensure reform, she’ll offer some thoughts on work-life balance and boutique law life.

First off, let me preface this by saying that I don’t speak for every COVID-19 law school grad. We’re not a monolith — we’re individual human beings with our own thoughts.

As someone whose law license hung in the balance during a global pandemic, who joined thousands of her peers in calling for necessary licensing alternatives, and who got the equivalent of a middle finger from folks who claimed they looked forward to having us as “colleagues” — I’ve got some words. And after all the conversations I’ve had during and after this debacle, I know there are many others who share these feelings, even if they won’t say so out loud.

Our diploma privilege advocacy was never about trying to just “skip the bar exam.” If our goal was to skip out on hard things, we wouldn’t have gone to law school. We wouldn’t have taken on hundreds of thousands of dollars of student debt, and spent three sleep-deprived years preparing to join this profession. It’s insulting to assume as much — to treat us like errant children who would capitalize on a health crisis to sidestep a requirement we’d known about and accepted for years. We raised and advocated for emergency diploma privilege because it’s a known path to licensure and was the rational solution under the circumstances. Between a rote memorization test of questionable value and ensuring people had a safe, ethical entrance to the practice of law, we figured reason would be pretty easy to see. Instead, we watched most states flail clumsily to avoid it, while a lot of practicing attorneys just … looked the other way.

Look, we get it. With the global pandemic and all, there was a lot going on. We weren’t everyone’s first priority, and we didn’t expect to be. But imagine being eyeballs deep in student loans, quarantine, and existential terror, and having the one thing standing between you and a living be a test that’s literally never been proven worthwhile, yet the profession insists on having for … reasons. And one whose administration is repeatedly bungled, very publicly, by the incompetence and delusion of the people in charge.

New York, for instance, thought problem solving looked like limiting its in-person test to in-state applicants — creating interjurisdictional chaos as out-of-state grads scrambled to test elsewhere (spoiler: that exam was later cancelled and moved online). Texas bar examiners, meanwhile, fully jumped the shark and decided to claim a hotel was “pandemic proof,” which is something I will … never forget hearing one say with a straight face on Zoom. All that time, examinees — myself included — clung to the hope that rational minds would ultimately prevail. And in a small handful of miracle states, it did. But for the rest, the situation just continued to heighten in absurdity — to the point where, to get or keep jobs they’d already earned, examinees had to attend live superspreader events (pre-vaccine, mind you), or use software that forced some to soil themselves on camera or blast light on their face so their skin color could maybe be recognized.

For a profession that so loudly touts its collegiality and ethics, this was a pretty egregious way to welcome us during a time that had already reached historic levels of awful. And while we recognize everyone was struggling in different ways, empathy isn’t a finite resource, and we don’t accept narratives otherwise. It was well within the profession’s capability to do better for us and for, really, any of the attorneys who received our desperate outreach, or saw one of the news articles about this, to choose to care. We remember and appreciate the ones who did, but the many who preferred to ignore us — or worse, scold us for speaking up — really laid bare the scale of the profession’s contempt for newcomers, which isn’t easily forgivable. We know there was energy that could’ve been used to help us because we watched it get poured, by the bucketload, into making things worse. It should really go without saying that no one should have to roll the dice on their health and basic human dignity to become a lawyer. Yet it was with breathtaking breeziness that we were told to do so and to sign waivers ensuring those responsible would never be held accountable.

These nationwide events that transpired should be enough to demand a total, urgent revamp of how we license attorneys and who we have spearheading those decisions. And yet it often feels like we’re expected to just … forget, to let it go, like other lawyers have let their bar exam memories fade. Make no mistake, our experience was nothing like the bar exams of the past, and to suggest as much shows a fundamental disconnect between what really happened and the profession’s comprehension of it. Perhaps if more attorneys saw us talking about our experience as necessary and valuable, rather than as an annoyance, we could work together to ensure things never go down that way again. But even that often seems like we’re asking for too much — so we stay quiet, not talking about it, but not forgetting.

If you think being upfront about how the profession failed us qualifies as “whining,” you’re not the first. Trust us, getting dismissed or belittled won’t come as a shock. It would be a lot more comfortable for everyone if we just called a mulligan, pretended it was all a bad dream. But the reality is this: during the height of the pandemic, the vast majority of jurisdictions abdicated their responsibility to treat examinees like people worthy of respect. We were disposable test subjects who, upon entering the profession, weren’t shown any remorse or given any apology. Even just a basic, “hey, we messed up,” could be a productive step toward mending fences, but there’s no sign of that on the horizon. And while we’re smart enough not to wait around for it, you’d probably still be pissed too, if you were in our shoes. What happened was totally avoidable, and we got screwed anyway. In ways that were, at best, reckless — and at worst, purposeful.

So the next time you wonder why some newer attorneys don’t grovel more, or don’t seem as appreciative to be around people who didn’t stick up for us when we needed it most, remember — we’re still mad, actually. And we have every right to be.

Liz Gil is a founding attorney at Optimal Counsel LLP, a modern, tech-enabled boutique law firm serving entrepreneurs and growth-stage companies. She previously practiced in Fenwick & West’s New York office, and graduated from Duke University School of Law with a joint JD/LLM in Law and Entrepreneurship. In her spare time, she enjoys writing about the legal profession, in both serious and un-serious ways. You can find her tweets about that (and her dog, Cedar) on Twitter @lizcgil.

What Are the Different Types of Business Litigation?

What Are the Different Types of Business Litigation?

Trying To Justify Your Procrastination As Studying? Feel Free To Get A Little Spooky