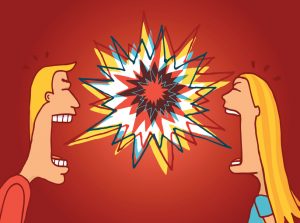 I admit it: I was wrong.

Politicians always offended me when they showed artificial respect for each other.  On the Senate floor, a Democrat would refer to “the distinguished gentleman from Mississippi,” when the Democrat really was itching to say, “that moronic, low-life, S.O.B.” During debates, politicians would refer to their opponents as “my good friend, with whom I simply disagree on some issues,” when they were really hoping their opponents would be hanged, drawn, and quartered.

I always thought it would be more honest, and better for society, and surely more entertaining, if politicians said what they really thought about each other.

The gloves have now come off. During the 2016 campaign, Donald Trump showed that you could simply insult your opponents — they had ugly wives; were low-energy; were crooked; whatever — and the public didn’t condemn the insults. Now, it’s a matter of “owning the libs,” or locking your opponents up, or accusing your opponents of pedophilia, or anything else that comes to mind.

I was wrong when I thought that would be an improvement. That’s bad.

When politicians showed a hint of civility to each other, the general public didn’t get quite as worked up by political debates. Once politicians took off their gloves, everyone else felt empowered to take off their gloves, too — and social media gave everyone the chance to express personal insults, completely removed from discussions of policy.

So, on the one hand, name-calling — a trend that Trump really started — is here to stay. On the other hand, I suspect that, once Trump is off the scene, the desire to praise Trump to the heavens will end.

I’m not talking about Trump’s personal political power. I’m talking about his legacy. Conservatives still praise Ronald Reagan to the heavens, even though he’s no longer around to endorse candidates. Conservatives loved what Reagan did with the defense budget, taxes, and so on, and they still hold him up as an example of how a great conservative would govern.

The instant Trump is off the political scene — by saying that he won’t run in 2024; running and losing in 2024; illness or death; whatever — the Trump legacy will vanish.

After all, there is no real Trump policy legacy. I can’t believe that Republicans will remain the party opposed to free trade, in favor of ballooning deficits, and so forth. I’m not sure where the party will go on “America first” versus “NATO’s not such a bad idea, after all.” And there are, of course, some policies — anti-immigrant, economic populism, social conservatism — that may have legs. But there was no platform in 2020, and there’s no Trump policy legacy to persist into the future.

Without a real policy, all that’s left is the Trump personality. That has always had very few admirers, even within the party. Many Republican leaders who supported Trump would distance themselves from his language, saying, for example, “I’m not quite sure I would have used those words,” after some Trumpian outburst. And Republicans are starting to say out loud — and will speak even more forcefully once Trump’s gone — that Trump was a little childish, maintaining that every official who left his administration had always been an idiot, anyway, and that women with whom he’d allegedly had affairs (or worse) were “horseface” or not his “type.”

All the people who loathed Trump in 2016, but adore him now — Ted Cruz, and Lindsey Graham, and on and on — will come to loathe Trump once again in 2025.  “He was never really my type,” they’ll say, “but the only way to influence policy is to stay on good terms with those in power. I had to say all that stuff I didn’t believe, because otherwise I would have lost my influence.”

At that point, only one piece of Trump’s legacy will remain — the degradation of our political discourse.

I’m afraid we’ll all be the worse for that.

Mark Herrmann spent 17 years as a partner at a leading international law firm and is now deputy general counsel at a large international company. He is the author of The Curmudgeon’s Guide to Practicing Law and Drug and Device Product Liability Litigation Strategy (affiliate links). You can reach him by email at inhouse@abovethelaw.com.

What Laws Apply In Metaverse?

Another Biglaw Firm Joins The Ranks Of Recent Big Spenders!