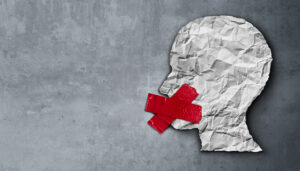 Whenever the mainstream media lends more than a few seconds to discussing climate change, they feel obliged to feature one of the 99 percent of scientists who believe in warming against one of the 1 percent of discredited scientists claiming it’s not real. That doesn’t make any sense, but climate deniers and industry lobbies leaned on the media for years that “fairness” required “both sides” of the discussion. That the scientific community already heard both sides, conducted experiments and studies to evaluate both sides, and resoundingly concluded that only one side was correct didn’t matter… and so we get a form of twisted affirmative action of ideas that can’t hack it. Though not to address systemic disadvantages, but because they’re just bad ideas.

The right-wing “free speech” grift deploys this same strategy. Whenever conservative talking points feel unappreciated — whether they’re getting protested, or marginalized as unserious academics, or just not getting invited to parties — they respond through indignant whining that it’s an assault on their “free speech” that people don’t like what they’re saying. Then they wait for tacitly “liberal” cowards buckle like the media did.

Some federal judges recently pulled a publicity stunt and claimed they wouldn’t hire Yale Law grads as clerks to punish the school for violating “free speech.” Yale responded as Yale generally does these days, by jettisoning any semblance of principle to cater to a transparent intimidation campaign.

And that, folks, is how you use “free speech” rhetoric to advance fascism.

The ABA Journal has an article detailing Yale Law’s efforts to appease the hacks behind these efforts:

• In March, the law school “made unequivocally clear” that attempts to disrupt campus events are unacceptable.

This one requires some context. The underlying event involved the school GIVING A PODIUM TO A MEMBER OF A RECOGNIZED HATE GROUP. Put aside everything else, this incident turns the traditional notion of free speech on its head. Typically the value of the right is in protecting people who don’t have the institutionally supplied stage. It’s about shielding the people who would protest the narrative spewing from zones of authority like governments, schools, titans of industry, etc.

But that’s the other trick of this right-wing rewrite of the Bill of Rights: old free speech used to be about allowing everyone to speak free from punishment, new free speech is about demanding that everyone else listen or risk punishment. While once concepts of free speech protected vile speech as the necessary evil of an open democratic society, vile speech is now to be celebrated as the end in itself. It’s not that the Nazis should be allowed to march in Skokie, it’s that they should march without protest, boycott, or criticism — new “free speech” demands they not only speak but be heard. This turn has never ended well.

Some students protested this decision — and while right-wing outlets portrayed the protest as a mob, in reality the student protesters dutifully allowed the event to go on while protesting outside. It turns out that Yale Law does have reasonable “time, place, manner” restrictions that give protesters an opportunity to protest while allowing the event to continue. This protest followed every one of those rules and the event did continue to its scheduled conclusion.

But when the administration responds to the details of this event with an “unequivocally clear” statement against attempts to disrupt an event, as opposed to recognizing that “all rules were properly followed and the event was held as scheduled,” it’s an effort by the school to chill speech above and beyond the existing framework.

• The law school adopted a policy banning the surreptitious recording of meetings and events sponsored by the law school or on its property. And the law school banned classroom recording absent permission. Any recordings made cannot be shared or posted. The purpose is to encourage the f[r]ee expression of ideas.

Editing people out of context to drag them through the mud is bad. And trying to surreptitiously record a private conversation as a “gotcha” moment is morally dodgy because there are fewer checks on someone disingenuously editing the material. But banning the recording of public events and classes is the heart of censorship.

And here’s where I’m standing up for the conservatives, because this policy is mostly targeted at the FedSoc goons who recorded the “protest” earlier this year and sent snippets to media that made it look worse than it was. While these clips fueled the fascist news cycle that brought us here, I refuse to say it wasn’t within their rights to record them. No matter how acontextual those clips might be, absent disingenuous editing, the isolated incidents did happen.

• The law school redesigned orientation “to center around discussions of free expression and the importance of respectful engagement.”

• The school hired a new dean of students, who will encourage students to resolve disagreements among themselves, “rather than reflexively looking to the institution to serve as a referee.” She replaces the associate dean who retired after seeking an apology from the student author of the trap house invitation. The student had secretly recorded the conversations.

In context, “encourage students to resolve disagreements among themselves” means “the school will abdicate its responsibility to address discrimination and racialized and sexualized bullying.” So when they say the orientation stresses “the importance of respectful engagement” that importance stops at the point where the school might exert any effort to promote that environment.

Remember that this is the school where FedSoc folks wore “No They” shirts on Trans Visibility Day. But Yale Law’s position is that Trans folks need to figure it out for themselves if right-wing trolls want to mock Trans lives to their faces.

As a pure free speech matter, of course students can say awful, bigoted things. But schools aren’t about laissez faire acceptance of every stupid thought someone wants to spout. At a certain point a school — especially a school supposedly about training advocates — has an obligation to intervene to maintain open access to the forum. That why Yale Law’s “vibrant intellectual environment” framing elevates these reforms to farce. Yale’s “vibrant intellectualism” boils down to hate groups should get a forum and quiet acquiescence while marginalized students should suck it up if others try to bully them into silence.

It takes a special mark to fall for a con this transparent. But, hey, what do you expect Yale Law to do? Miss out on a couple of clerkships? There are more important issues at stake here than your whole “open democratic society,” everyone!

What Exactly is Commercial Litigation?