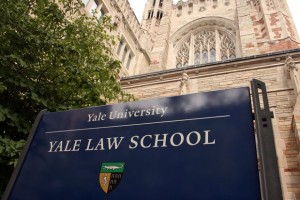 Ever since Yale Law’s FedSoc and NALSA sent out their troubling party invite sprinkled with racial stereotyping, the “free speech” hot takes haven’t stopped. Right-wing media predictably cast the Yale administration as jackbooted oppressors for asking the author to apologize. Commentators leapt at the opportunity to sneeringly throw air quotes around “triggering.” The Washington Post even published this boneheaded — and racially insensitive in its own right — nonsense.

But the thing is… none of this is a free speech issue. At all.

Not just because Yale is a private institution — though that’s a critical fact. Not just because this was put out as an official statement from school-recognized student groups — though that’s also critical. But there’s just nothing that amounts to any restraint on speech here other than a student’s refusal to take any responsibility for his actions.

Thompson & Horton held a Texas CLE yesterday breaking down the legal issues schools — both in higher ed and K-12 — need to consider when confronted with issues like this one. I’m even a panelist! Check out the whole webinar here. Watch my eyes roll all the way back into my head when Eugene Volokh is cited as an authority on free speech issues!

But the key takeaway from the discussion and the string of articles over the last month is that the core mission of the right-wing these days is to bring back the “good old days” when no one hurt their feelings when they made racist and sexist comments. We’ve come quite a way from protesting the war in Vietnam to “free speech means never having to say you’re sorry,” and it’s been a hell of a toboggan ride.

In recent years, we’ve experienced a one-way ratchet—at Yale Law, in legal academia, and in many other spheres, including higher education in general, journalism, social media, and corporate America—that goes solely in the direction of certain left-wing views. The holders of these views make the most noise, and they bully or shame people into agreeing with them—or at least into staying silent…. The members of the silent majority are speaking up. We’re telling our leaders that yes, there are actually real people on the other side of what Bari Weiss refers to as the “Woke Revolution.”

And we’re not bad people. We are simply people—intelligent, thoughtful, good-hearted people, who wouldn’t be caught dead in MAGA hats—who think things have gotten a little out of hand.

Putting aside that David’s leaning into this “simple people in the silent majority” routine like he’s writing an example for the teachers’ edition to Umberto Eco’s Ur-Fascism article, this is also just wrong. There isn’t a woke mob claiming offense at every innocuous comment. You know how I know that? Because we’re still talking about this one incident a month after the fact.

People say stuff that can come across as racist or sexist all the time. Sometimes it’s intentional, sometimes it’s accidental. When I’ve been in that position I go ahead and apologize… because I’m an adult. And that’s really what’s at stake here because what’s “gotten a little out of hand” is someone asking these folks to embrace the fact that they might be — gulp — in the wrong. To feel the momentary embarrassment of having to say, “I’m sorry.” It’s about perverting a fundamental tenet of democracy into a bubble to shield them in a state of arrested adolescence.

But then again, I got my law degree from NYU and not the University of Austin, so who knows?

Biglaw Partners Need To Remember Their Humanity When Conducting Interviews