Young Attorney Has $347,000 In Student Loan Debt, No Job, And Lives On Welfare 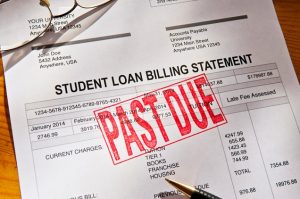 There has been a lot of talk about the Great Resignation, where employees now have more leverage when it comes to obtaining jobs and negotiating salaries due to a labor shortage. But not everyone has benefited from this, and one young lawyer is struggling with what appears to be an unfathomable debt load.

Business Insider featured Steve, a 2017 graduate of the Seattle University School of Law. Steve grew up in a working-class family and became a social worker after graduating college. He said he was frequently advised by attorneys and those around him that pursuing a law degree would leave him well off.

So he went to law school and took out student loans to cover the full cost of attendance thinking he would get a job after graduating and make enough money to pay the loans in full. Some of his loans were Grad PLUS loans, which has the highest interest rate at 7.54%.

But life dealt Steve a bad hand. His fiancée had medical issues that prevented her from working and forced Steve to delay taking the bar exam. They left Seattle to move to Nebraska to temporarily live with family and then moved to Albuquerque, New Mexico, where they now live. They are receiving government assistance in the form of rental assistance and the Supplemental Nutrition Assistance Program.

Steve hasn’t been able to get a steady income and has no monthly student loan payments under his income based repayment (IBR) plan. Interest accrual is frozen until August 31 which is when the loan repayment moratorium is expected to end unless there is another extension.

Steve’s situation should sound familiar to most young lawyers. He got optimistic advice about law school from people who probably didn’t know better and from attorneys who should have known better. And he financed his entire legal education on the hopes that he would get a job after graduation. He was unable to find a job after graduation due to his unfortunate circumstances and his alma mater’s career services department couldn’t help as they probably don’t have a lot of alumni connections in Albuquerque.

And now he has nearly $350,000 in nondischargeable student loans — more than the average cost of a home in Albuquerque. Not only that, assuming an average interest rate of 6%, his loans will accrue $20,000 in interest annually. So unless he can afford to pay a minimum of $1,735 per month just to cover the interest accrual, his loan balance will continue to grow and eventually he will end up an IBR lifer.

Sadly, his large debt is not surprising as there are many like him. Looking at the average cost of law school and rent in large cities like Seattle, full-time students will have to borrow at least $80,000 annually to cover costs. After three years, law school debt can exceed $250,000. And assuming there is additional undergraduate debt of $50,000, the total debt can be $300,000.

And will people like Steve get some form of loan forgiveness? The government doesn’t seem sympathetic to lawyers because they think all lawyers make obscene salaries. But even if he does, his IBR status and interest accrual could negate the benefit. For example, if $10,000 of his loans were forgiven as President Joe Biden proposed, it will not change things for him. His IBR payment is already zero so the partial loan forgiveness will not affect his loan payments. Also, his interest accrual will probably eat up the savings in a year or two.

Steve went to law school so he wouldn’t have to worry about putting food on the table. Now he is living on food stamps and his career outlook is uncertain. While I hope his situation improves, he may have to become a “criminal” lawyer or manufacture and sell meth on the side to make ends meet. So for those who are going to law school this fall but are hesitant to demand tuition discounts, read his story because there is a good chance you can end up in the same situation if you do not do your utmost to minimize costs. And if the current inflation trends continue, you can leave with $350,000 or $400,000 in debt. Law schools do not owe you better grades just because you paid full tuition.

Critical Questions to Ask Before Choosing a Special Needs Lawyer